Because of their arrangement along the ecliptic, the constellations of the Zodiac are among the oldest known ones. Their representation has varied greatly over the centuries, but their number remains the same and most of the figures that make up the constellation have been established since antiquity.

Reproduction on tracing paper of the Chaldean zodiac from the Michaux stone, Charles-Hippolyte de Paravey, first half of the 19th century, Fonds Paravey, Ms 1198/1-6

The Paravey collection, which has recently been inventoried by the Library, includes reproductions of the Michaux stone, a stele brought back from Persia at the end of the 18th century with cuneiform inscriptions. The upper register shows representations of the Chaldean zodiac. While some of the figures are familiar to us (Capricorn, Scorpio, Sagittarius' arrow), others were probably replaced later by the Greeks.

This Renaissance edition of a Latin work from the Augustan period establishes the composition and history of the forty-eight constellations known at the time. On page 97, a scorpion holding a scale is shown. The constellation Scorpio, which was nearly 50° in the Babylonian period, was indeed cut in two by the Greeks, who turned its claws into the constellation Libra. Today, Scorpio is crossed by the Sun in six days, which makes it the smallest in the astronomical zodiac. In the astrologers' zodiac it measures, like the others, 30°.

In contrast to other works depicting constellations, we note here the desire to represent relatively faithfully the arrangement of the stars that make them up. This is particularly visible with Pisces: its two fishes are not drawn head to tail as usual, but are linked by their caudal fins by a ribbon that evokes both the Egyptian and Greek myths. The constellations are also accompanied by their astrological symbols. 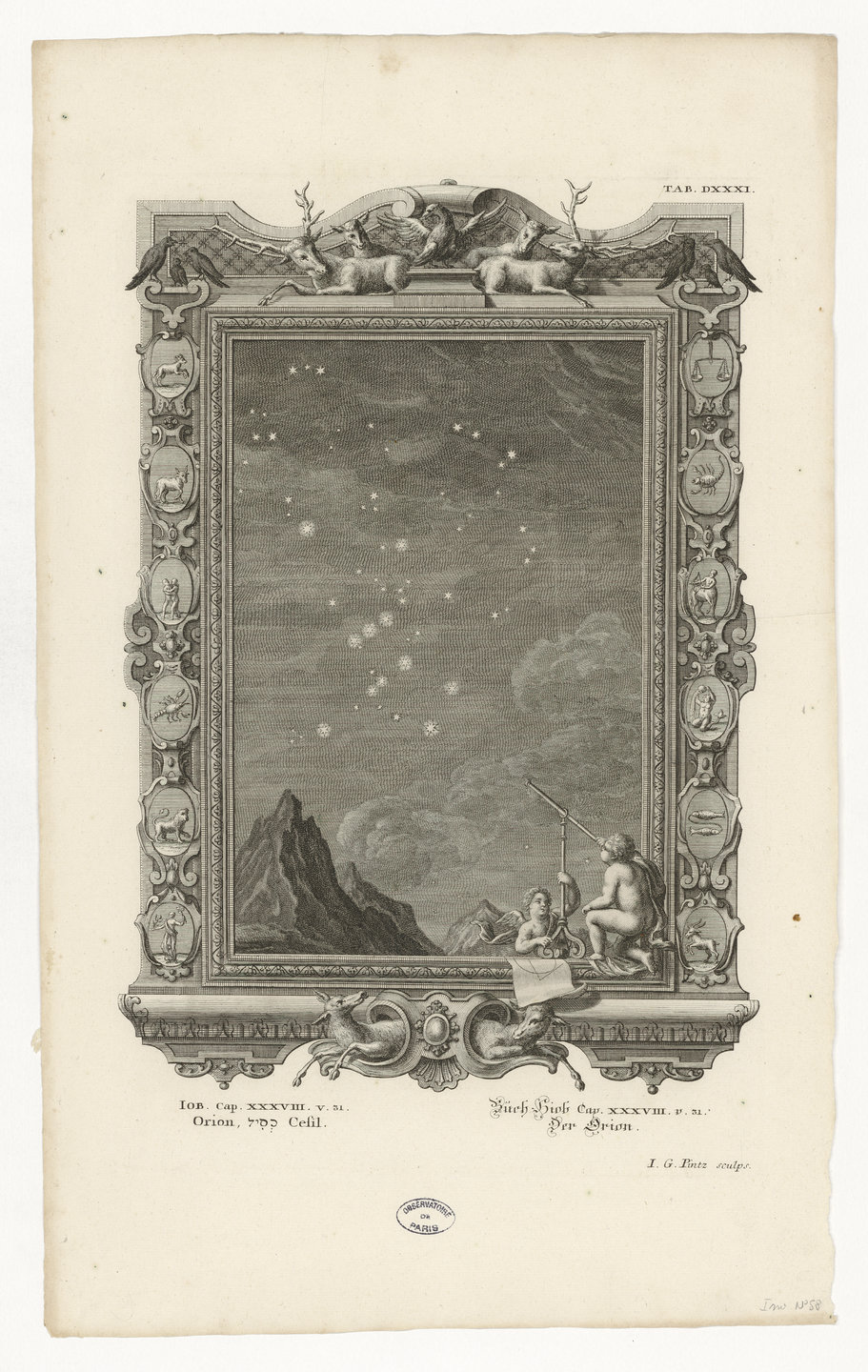 In the 18th century, the increasingly precise observation of the sky made it possible to identify a great number of stars, which were then placed in their correct positions in celestial atlases. However, the symbolism of the constellations was not yet abandoned, as shown here in this engraving of Orion, surrounded by medallions representing the signs of the zodiac.

This edition of the great atlas by Flamsteed (1646-1719) presents a double vision of the sky: both a symbolic vision - a celestial vault populated by constellations - and a rational vision - a regularly squared sky and stars identified by their celestial coordinates. Thus, there is a list of stars by constellation with different coordinates according to the time of the year and of the night, but also the ancient drawings of the constellations, here, Virgo. On the right, we see the intersection of the ecliptic* and the celestial equator* at the autumnal equinox, opposite the vernal point*. In the tropical zodiac, this point is always at the beginning of the constellation Libra (as in Greek times) but in truth it is now in the constellation Virgo as can be seen here. 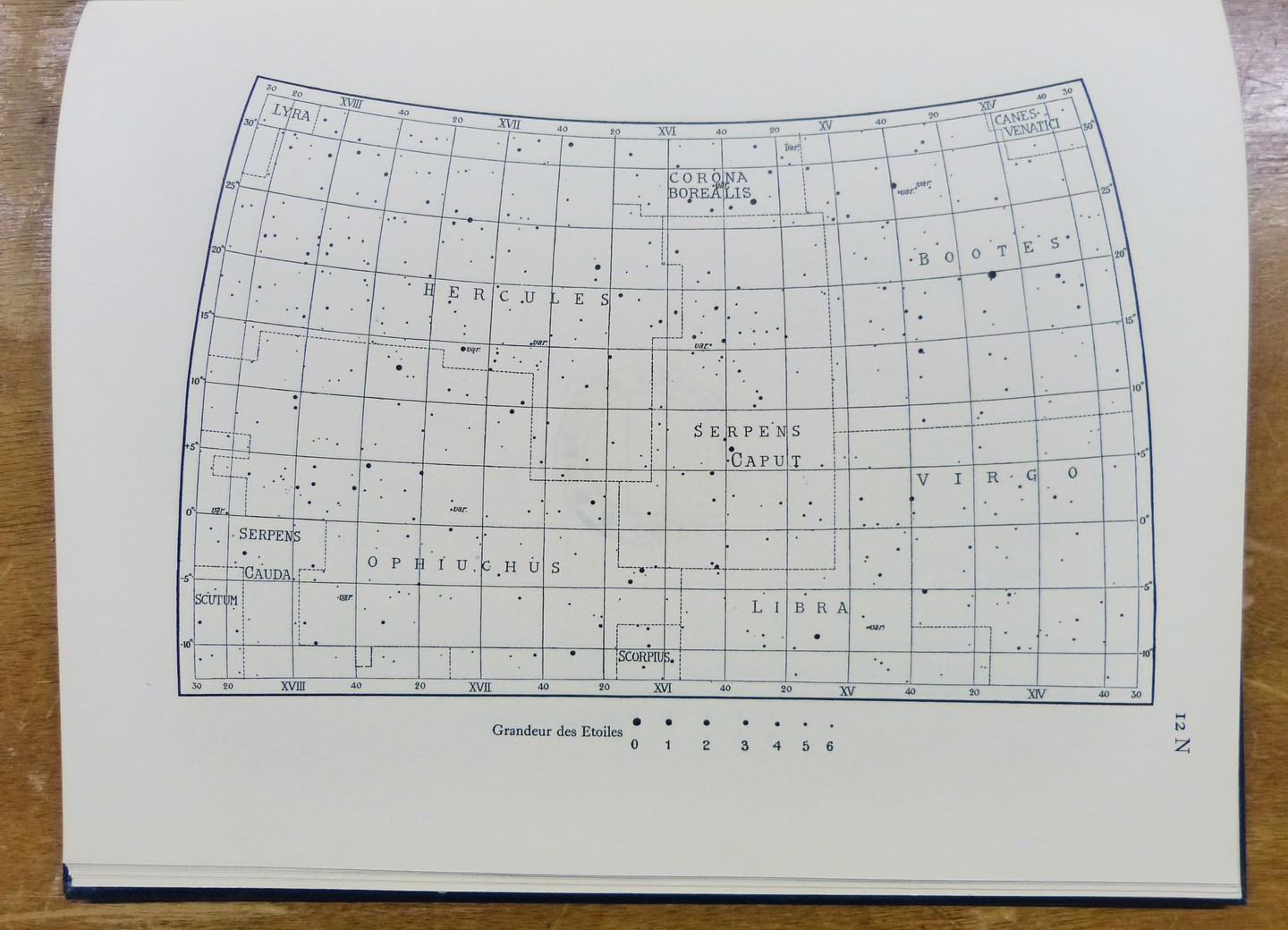 Last step in the division of the sky, Delporte proposes to fix in a definitive way the limits of the constellations, which were until then identified roughly thanks to their main stars. Here we can see Ophiucus, or Serpentarius, a constellation not used by astrologers, even though it lies partly on the ecliptic.