When drawing up horoscopes, astrologers take into consideration two main elements which reflect two distinct divisions of the sky: on the one hand, the position of the wandering stars in the zodiac, i.e. their ecliptic longitude, and on the other hand, their position within the houses drawn up from the time and horizon of the individual's birthplace. This double aspect allows the horoscopes to be more different from one another and therefore to better reflect the singularity of individual destinies.

Indeed, astrologers quickly realise that the planets take a long time to leave a sign (between 2.5 days for the Moon and 2.5 years for Saturn) which means that many people have the same horoscope. The division of the signs into three decans of 10° each allows for a first subtlety, which is however too limited.

The system of houses, suggested by Ptolemy but really developed in the 10th century by Abu-el-Saqr Abd-el-Aziz al-Kabisi, known as Alcabitius, allows for a much greater diversification. The twelve houses are sections defined around the horizontal north-south axis by the intersection between the meridian passing through the zenith and the north and south points, and the horizon. 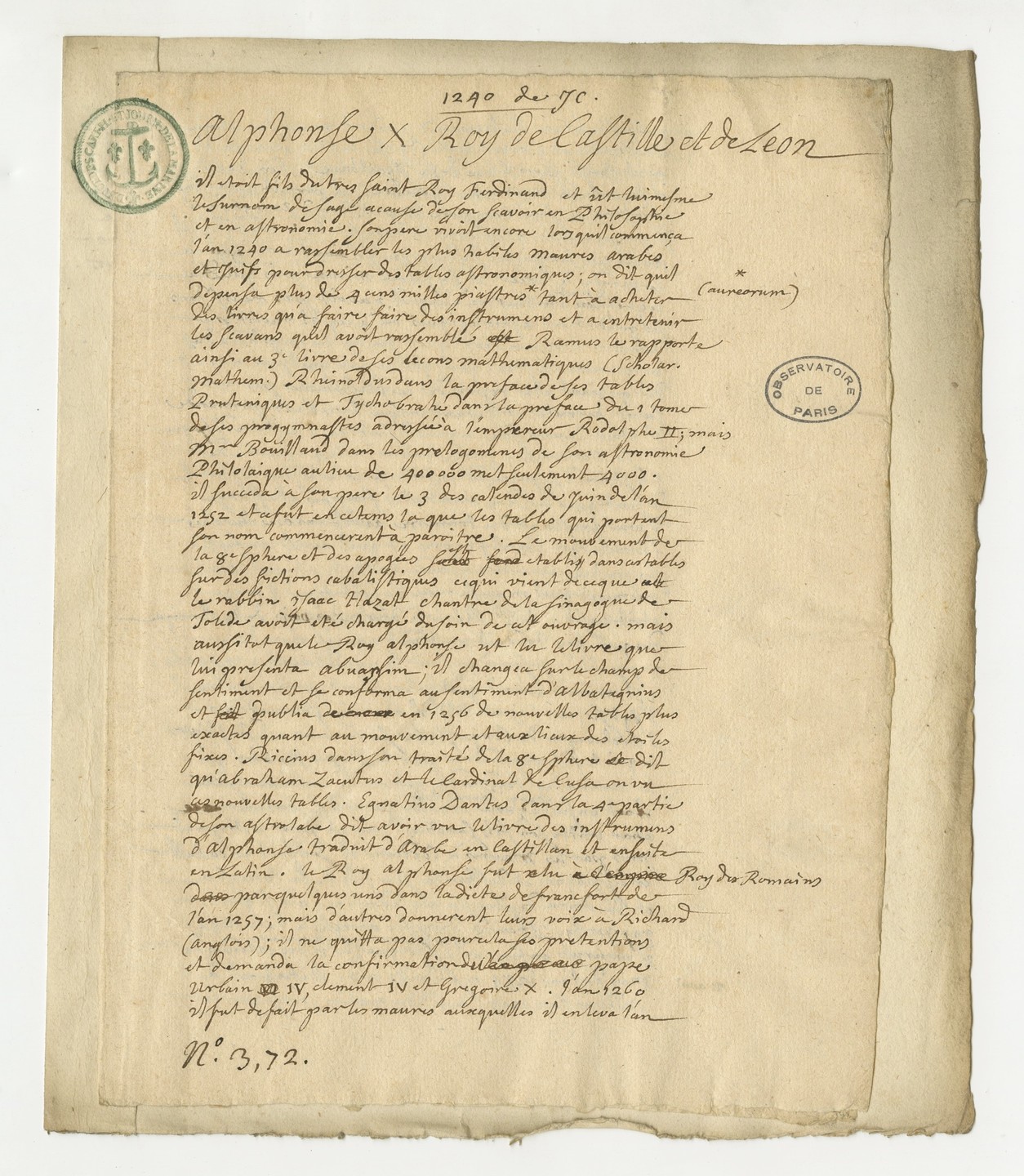 Alfonso X of Castile's biographical note, Joseph-Nicolas Delisle, first half of the 18th century, A1/2, n°3, 72

In the 13th century, King Alfonso X of Castile (1221-1284) brought together a group of scholars in Toledo to translate and update knowledge, particularly in the astronomical field. He asked them to improve the Toledo tables, an ancient reference whose accuracy was no longer satisfactory for astronomers and astrologers. 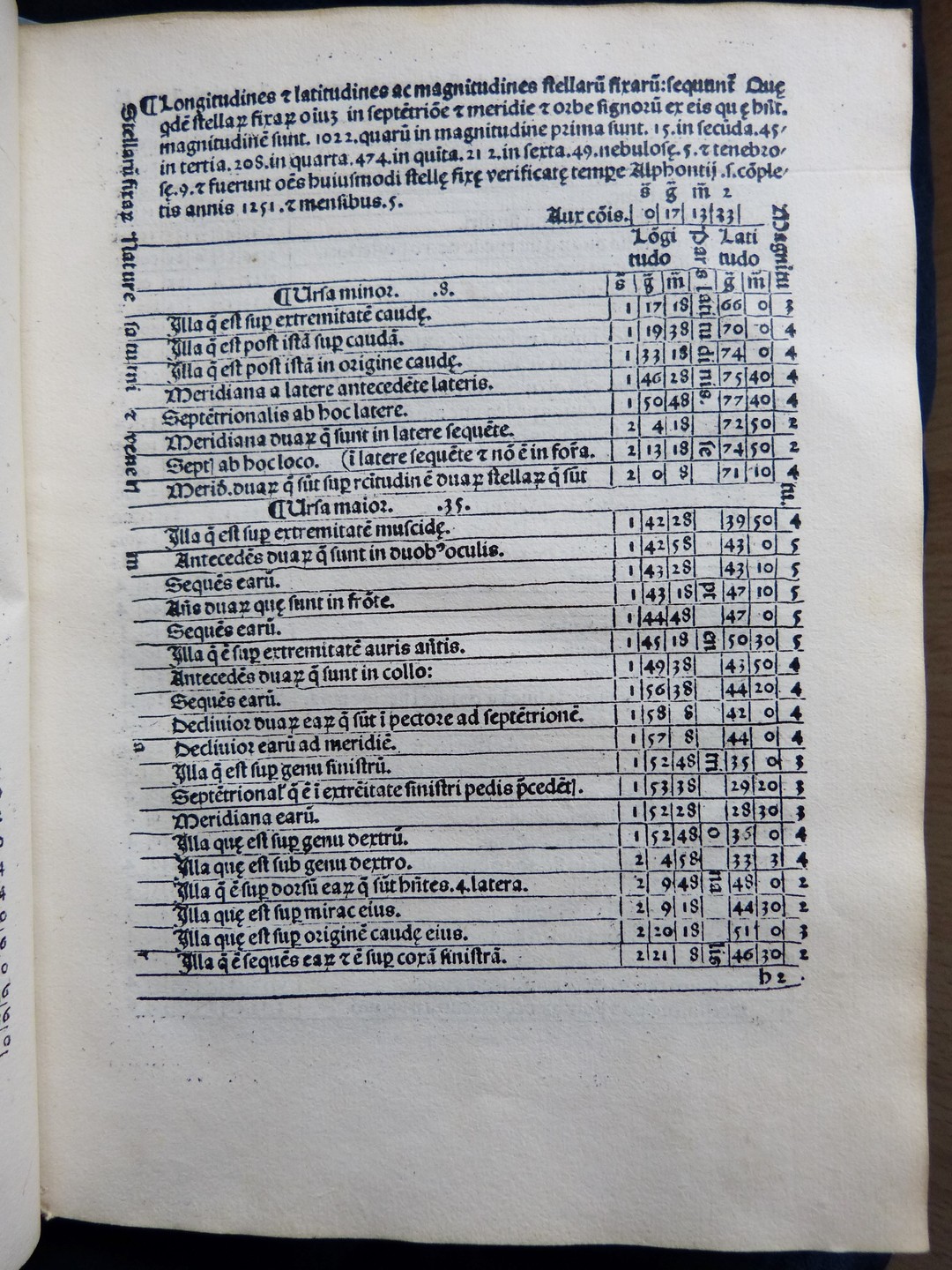 Table indicating the position of the stars of the Little Dipper and the Big Dipper, Tabulae alphonsinae, Alfonso X of Castile (commissioner) and Johannes Danck (author), 1483, 20569 [See the book on Gallica]

Among the causes attributed by astrologers to the frequent failure of their predictions was the lack of accuracy of the astronomical tables they used to establish the position of the stars in the horoscopes. Astronomers and astrologers of the Middle Ages therefore strove to create increasingly accurate tables. Among these, the Alphonsine Tables, created at the request of King Alfonso X of Castile, were the most famous and were published many times until the appearance of tables based on the work of Kepler at the beginning of the 17th century.

This remarkable work presents rotating discs associated with tables that allow for a relatively easy calculation of the position of celestial bodies. These calculations, based on a geocentric view of the Universe, attempt to provide a rational explanation for the apparent backward movement of Venus and Mars along the ecliptic at certain times of the year. In astrology, these two planets are then said to be in retrograde, which modifies their influences.

Similarly to the Astronomicum caesareum, this work makes it possible to calculate the position of celestial bodies thanks to a system of rotating discs. Here, it is the ecliptic* longitude of Mercury that can be measured, i.e. its position in the zodiac. It is also worth noting that the work is dedicated to Catherine de Medicis, Queen of France and a fervent adept of astrology.