The origins of astrology

Contemporary astrology has its roots in a long tradition of sky-watching that began in Mesopotamia in the middle of the third millennium BC. The stars were considered to be divine messages and their movements were carefully studied, in particular to predict the arrival of natural events, most of which were useful for agricultural endeavors. It also became the prerogative of religious orders, which used it to serve the aristocratic elite in order to determine the most propitious times to launch military campaigns or to undertake major construction projects.

Later, Babylonian astrology, known as Chaldean astrology, was very popular with the Greeks, who discovered it thanks to the campaigns of Alexander the Great. Compatible with a vision of the world defined by Plato and Aristotle, then with a geocentric vision of the universe developed by Claudius Ptolemy in the 2nd century AD, it became more personal as astrologers used the position of the stars to establish horoscopes that predicted the character and destiny of individuals. Astronomy and astrology were deeply linked at the time, even if they were recognised as having different qualities. Indeed, astronomy was of little use without the astrological predictions it allowed (natural or personal) and astrology could not exist without the observations and calculations made by astronomers. 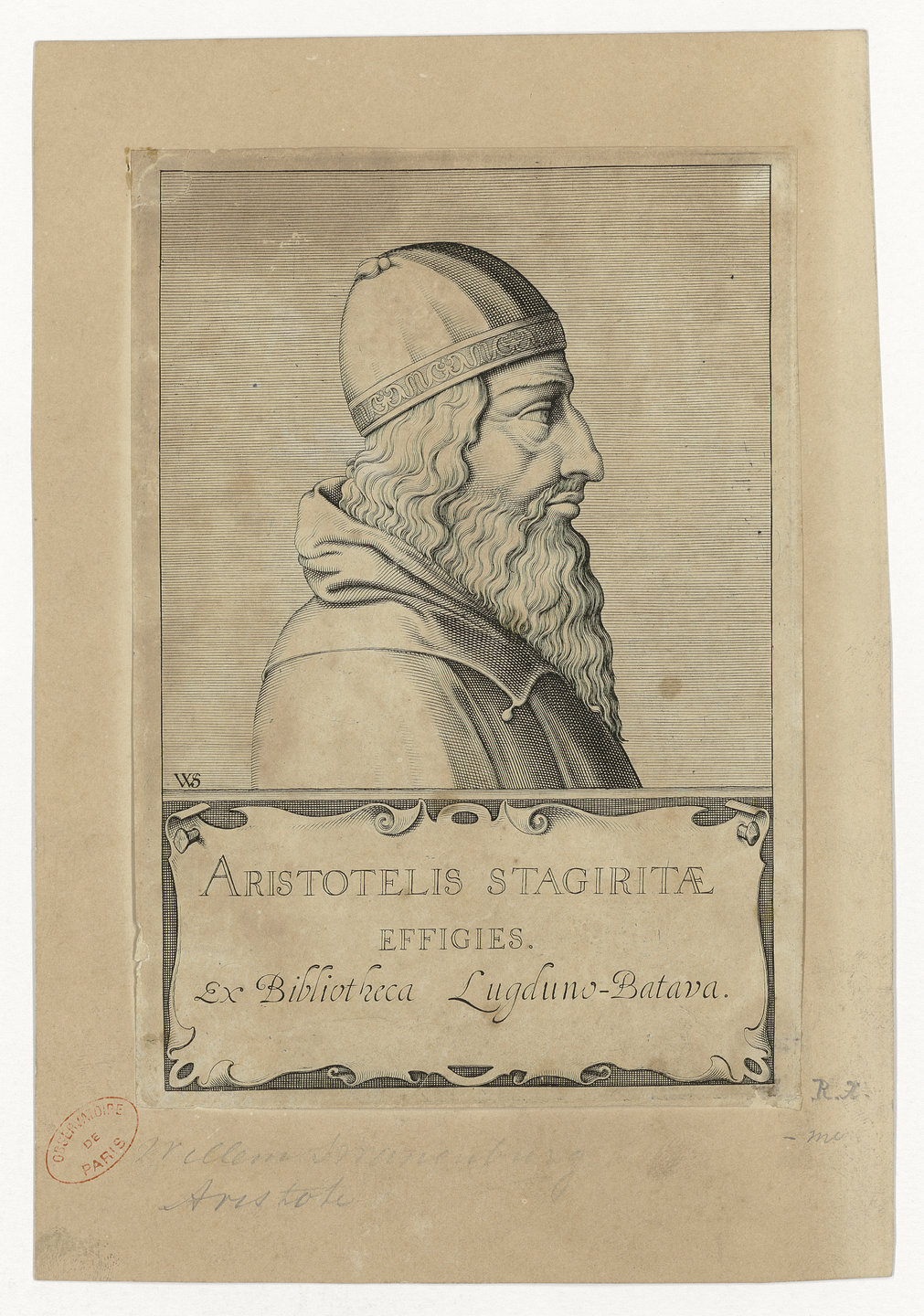 The Greek scholar Aristotle (384-322 BC) was interested in all the scientific fields of his time, and in particular the natural sciences. He determined the properties of matter by combining four simple qualities - cold, hot, dry and wet - to form the four elements: fire, air, water and earth. In addition, he also postulates the superiority of the supra-lunar world, unchanging and perfect, where the planets and stars are found, over the sublunar world, that of the Earth where everything is corruptible and ephemeral. The association of the qualities and elements with the planets and signs of the zodiac, as well as this vision of the cosmos, formed the basis of Western astronomy and astrology for almost twenty centuries. 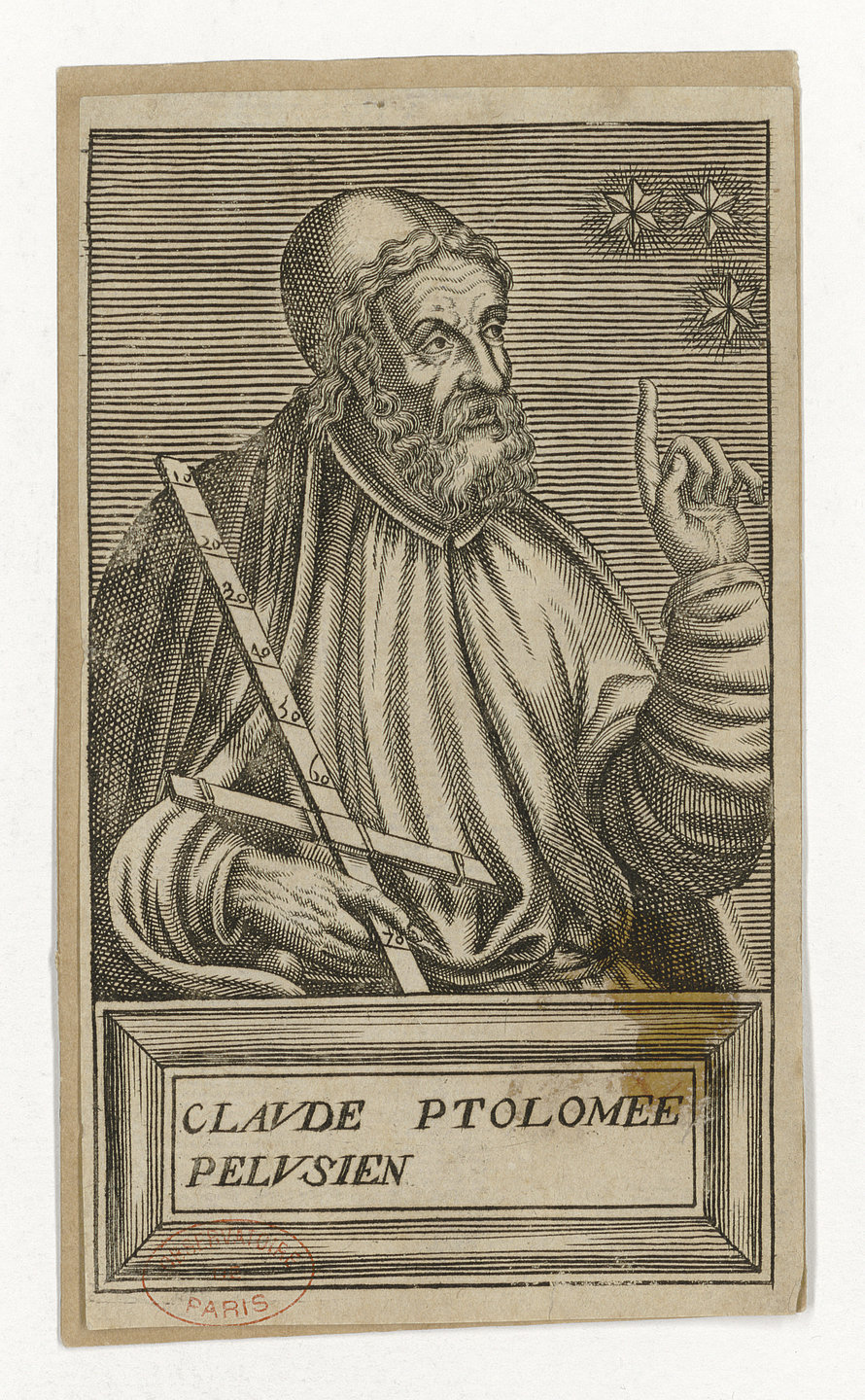 Mathematician, astronomer, astrologer, music theorist and geographer, Claudius Ptolemy (c. 100-c. 168) was a Greek scholar who lived mainly in Alexandria. He is the author of the best-preserved astronomical and mathematical work of Greek antiquity, the Almagest, and of an astrological work that is still refered to today, the Tetrabible. 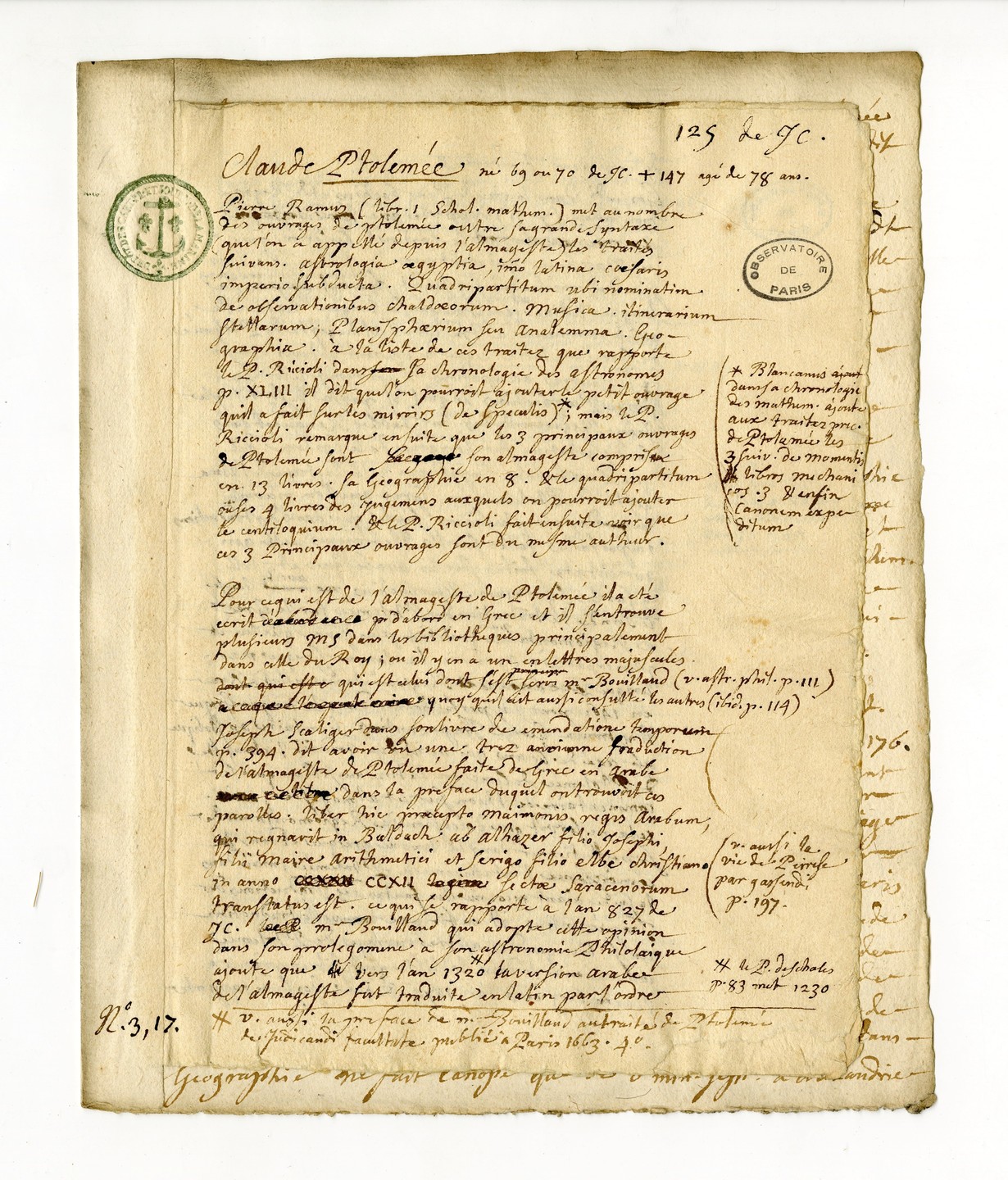 Among Delisle's autograph manuscripts curated by the Observatory Library is a collection of biographical and bibliographical notes on astronomers from all countries from Antiquity to 1738. Among the oldest, that of Ptolemy is exceptional for its length and precision. 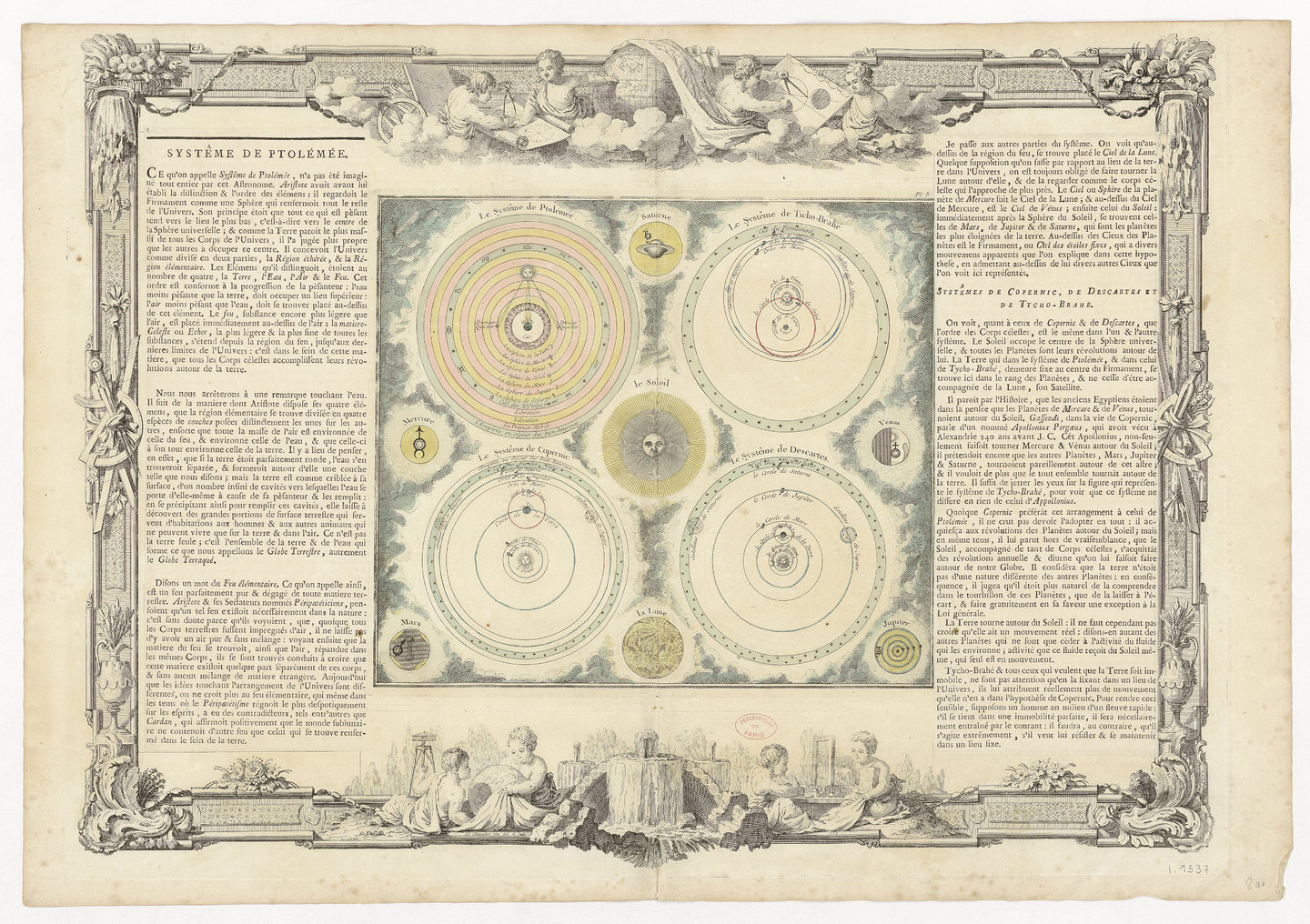 System of Ptolemy, with the systems of Copernicus, Descartes and Tycho Brahe, René-Jacques Le Charpentier, 1767, Inv.I.1537

With his system, Ptolemy established the supremacy of geocentrism until the 16th century and the emergence of the Copernican system. Its success and longevity can be explained both by its inclusion in the ancient models of Plato and Aristotle and by its compatibility with a Christian vision of the universe. The Earth, a changing and corruptible space, is placed at the centre of a sphere made up first of the four elements and then of a fifth, ether, a perfect and unchanging substance, whose lightness makes it the fabric of the sky. Within it the celestial bodies revolve around the Earth, from the Moon to the fixed stars, beyond which the Church places God and the angels. 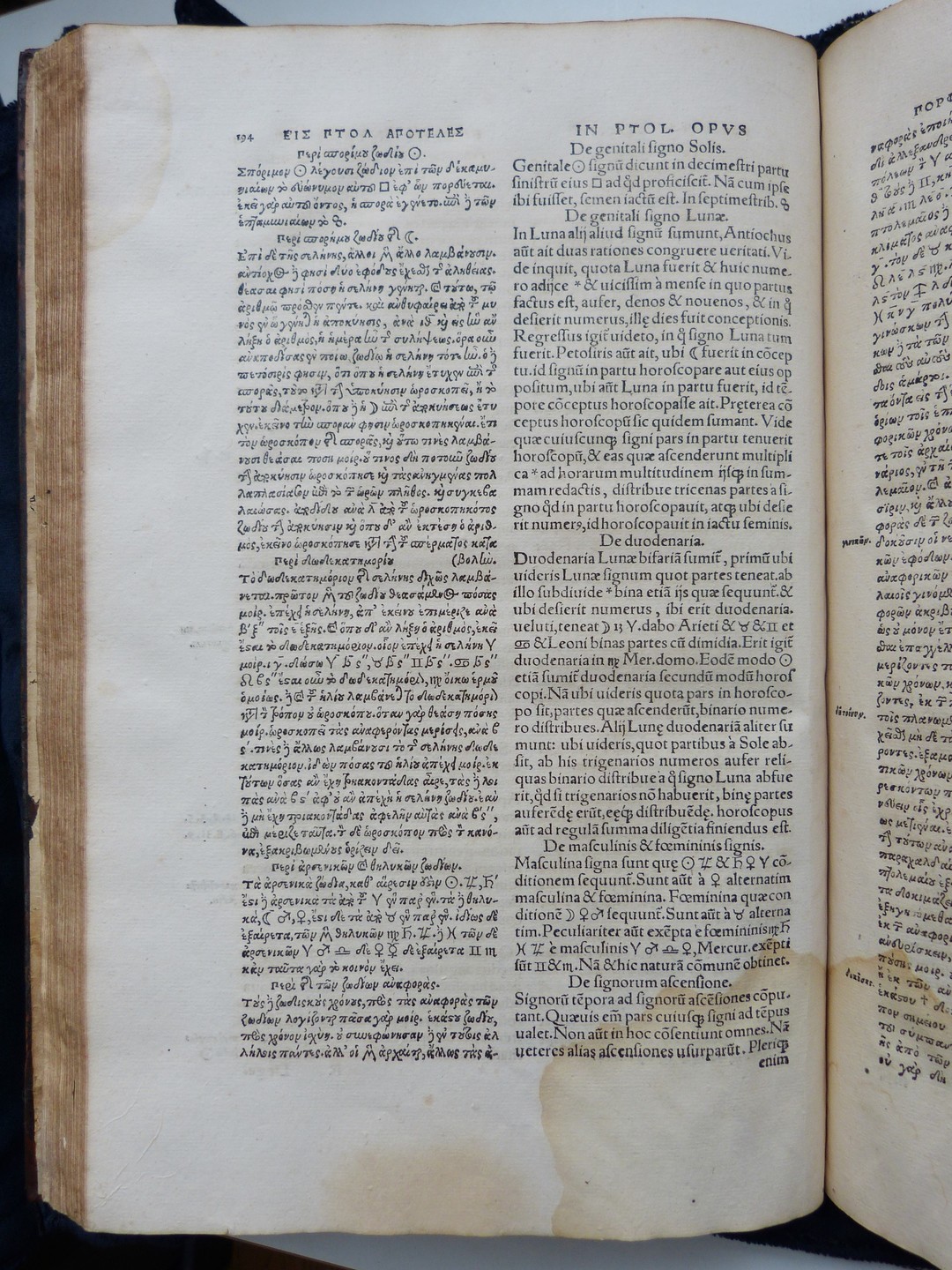 This sixteenth-century work compares the original text of Ptolemy (2nd century) with its Latin translation and offers an exegesis of Albumasar (9th century), thus showing the longevity of ancient astrological traditions. In particular, page 194 presents the symbols of the signs and planets and their association with the masculine and feminine domains.

Like many other scholars of his time, Ptolemy was both an astronomer and an astrologer, and he observed the sky carefully before proposing an interpretation. He made a clear distinction between the two disciplines: for him, astronomy was a definite science in which the regularity and eternity of the movements of celestial bodies were analysed using mathematics, whereas astrology was a conjectural science in which the effect of the configuration of the stars on the sublunary world was studied. In this work on astronomy, Ptolemy provides a list of known stars by constellation, indicating their position in the sky.