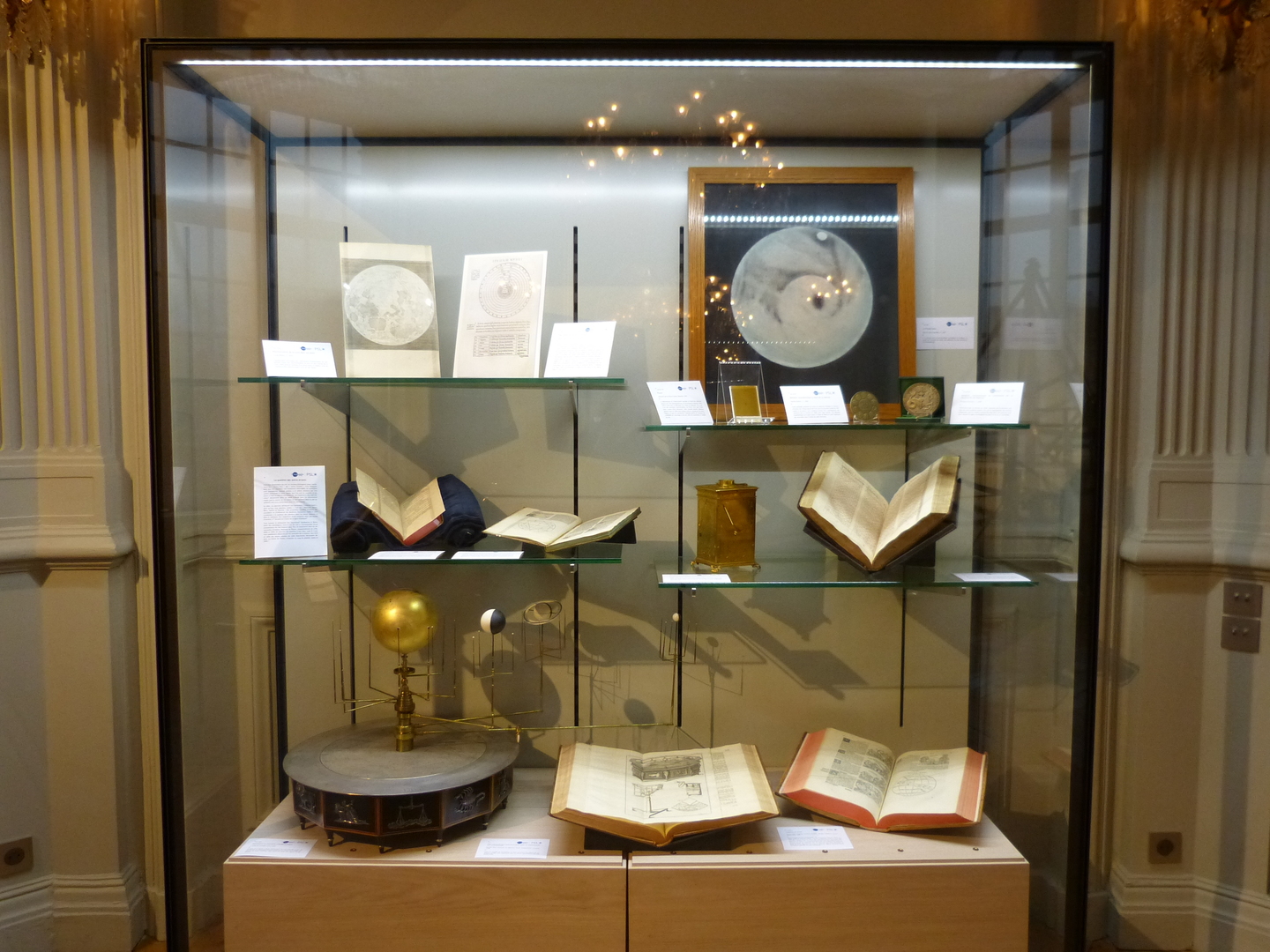 In their observation of the sky, the ancients were quick to distinguish between "fixed stars" and "heavenly bodies". The former were too far away for their parallax to be easily observed and were considered to be moving together, while the latter were seen to move around more freely. The trajectories of the seven planets* (the word "planet" coming from the Greek word "wanderer") thus became an object of study for astronomers, while the nature of these celestial bodies and their position in the sky acquired a rich symbolism for astrologers.

Indeed, the latter attribute to the luminaries - Moon and Sun - as well as to the five planets visible to the naked eye - Mercury, Venus, Mars, Jupiter and Saturn - properties capable of inducing characters and influencing human destiny. These are combined with the position of the planets in the twelve astral houses and in the zodiac, their trajectory being included in a band of approximately 17° on either side of the ecliptic line*.

Just as the axial precession* turned the astrologers' firmament upside down, so they had difficulty coming to terms with an increasingly detailed knowledge of the sky. They ratified the discoveries of Uranus, Neptune and Pluto, respectively in 1781, 1846 and 1930, by adding these planets to their list, but they were quickly overtaken by scientific advances. What to make of the large celestial objects discovered since then, or even of Pluto, reclassified as a dwarf planet in 2006?

Acquired by Charles X for the instruction of his grandson, the Duke of Bordeaux, this mobile planetary shows the stars to scale, surrounded by their satellites. Its base is decorated with the signs of the zodiac.

In this planetary model, the base with the signs of the zodiac seems more important than the planets themselves, which are very small. 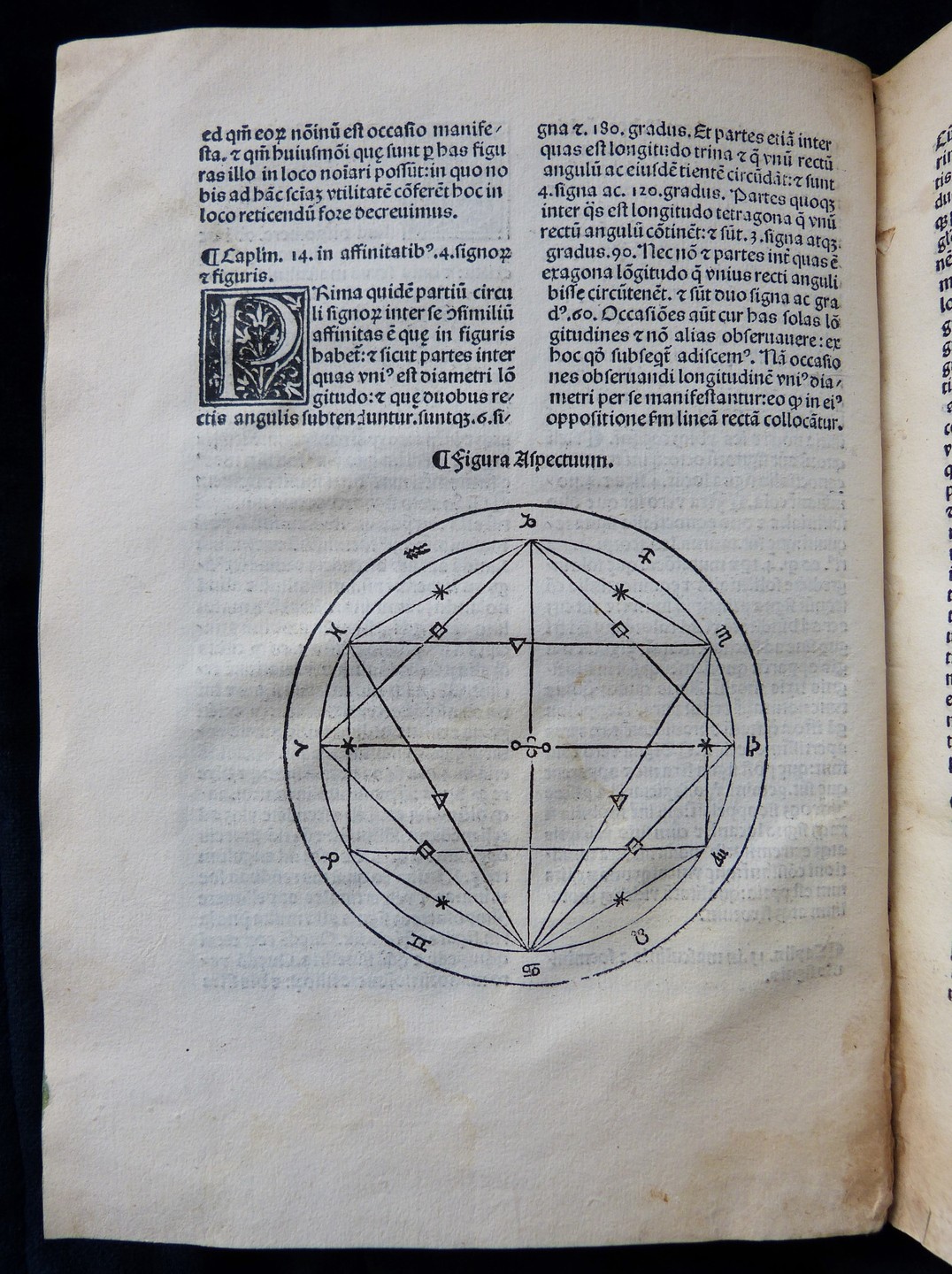 For astrologers, planetary aspects* are of capital importance in the conception of horoscopes because the influence of a planet is conditioned by those with which it is linked. The diagram opposite shows the main aspects considered by astrologers: conjunction, opposition, trine, quadrature and sextile.

Until the end of the 16th century, the vision of the cosmos was still based on Aristotle's physics and Ptolemy's system. Here we see the four circles of matter - earth, water, air and fire - that make up the sublunary world, then the spheres of ether that support the other celestial bodies in their supposed order of proximity to the Earth: Moon, Mercury, Venus, Sun, Mars, Jupiter, Saturn, the sphere of the fixed stars, and finally the outer sphere, which is mobile and is said to carry all the rest of the system along in its movement. 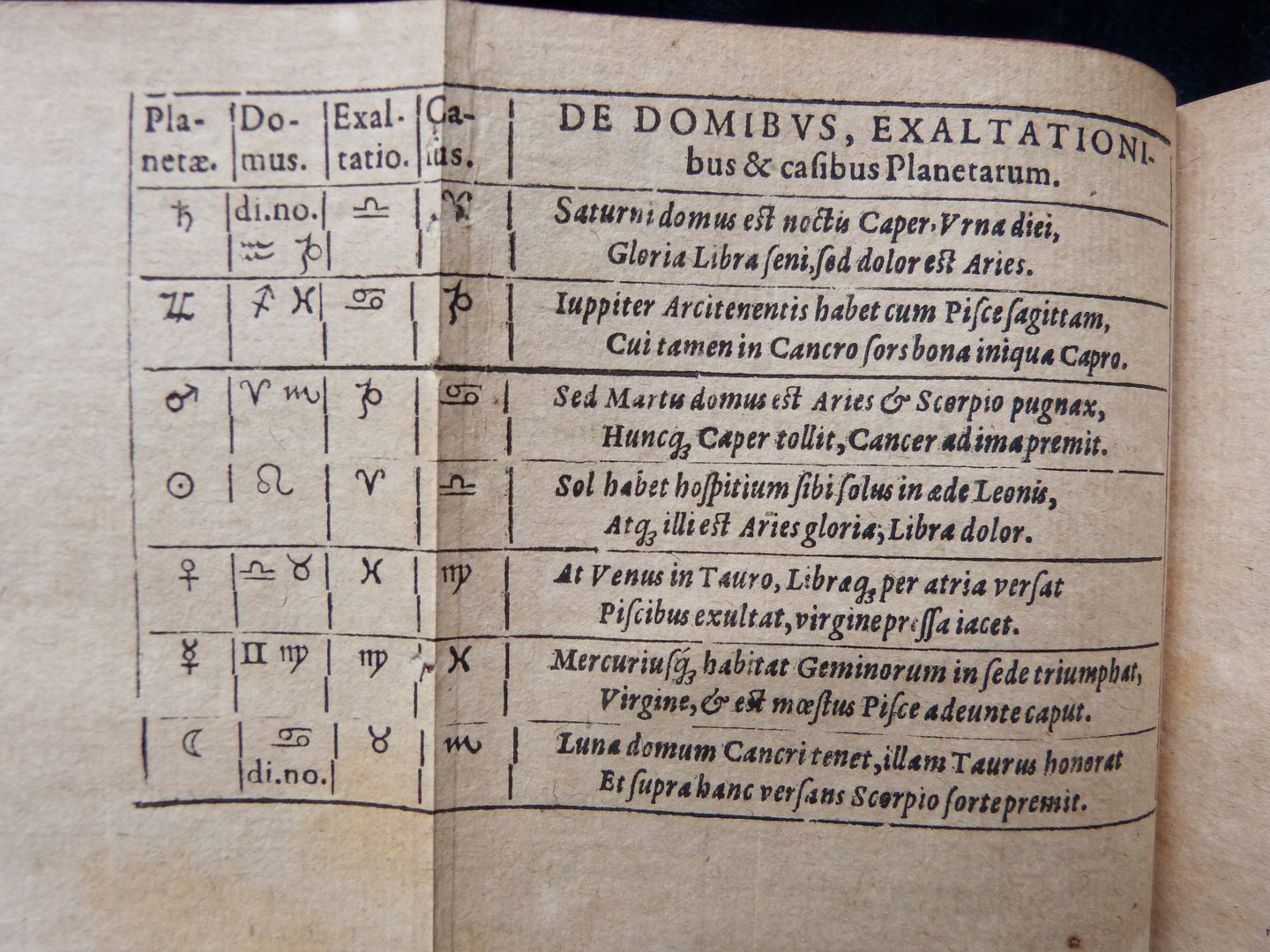 In astrology, the planets are said to have more or less influence depending on their location in the zodiac. Certain signs are supposed to exalt their effects, while others weaken or even pervert them. These relative positions are called "essential dignities" and the table above shows them. The planet's most favourable position is called "domicile", while the opposite is called "fall".

In addition to an engraving representing the celestial spheres, this page presents a table indicating the properties of the planets, whether they are considered malefic or beneficial and their association with metals, astrology and alchemy being at the time very closely linked. Thus, for example, the Sun is said to be hot and dry, beneficial, and is associated with gold.

Astronomers and astrologers alike are aware that the heavenly bodies are large, inanimate celestial objects, but it is not uncommon to find in books human representations of the planets with the characteristics associated with their influence. Here, Venus appears as the Goddess of Love, accompanied by Cupid, on a chariot pulled by doves, the wheels of which represent Taurus and Libra, the zodiac signs in which that are said to be the planet's domicile.

Like the Sun, the Moon holds a special place in astrology. As a changing planet associated with the tidal cycle, it appears to be one of the most indisputable examples of the influence of the stars on the Earth. It is reputed to have just as much influence on human destiny, which is why the tables indicating its position are particularly used.

A precious object made of gilded bronze and silver, this kit contains everything the astronomer needs to draw - square, ruler, compass, pencil, etc. - while presenting on its different sides tables useful for the calculations he may have to make. On this side, a table and a graduated ruler are used to determine the position of the planets. 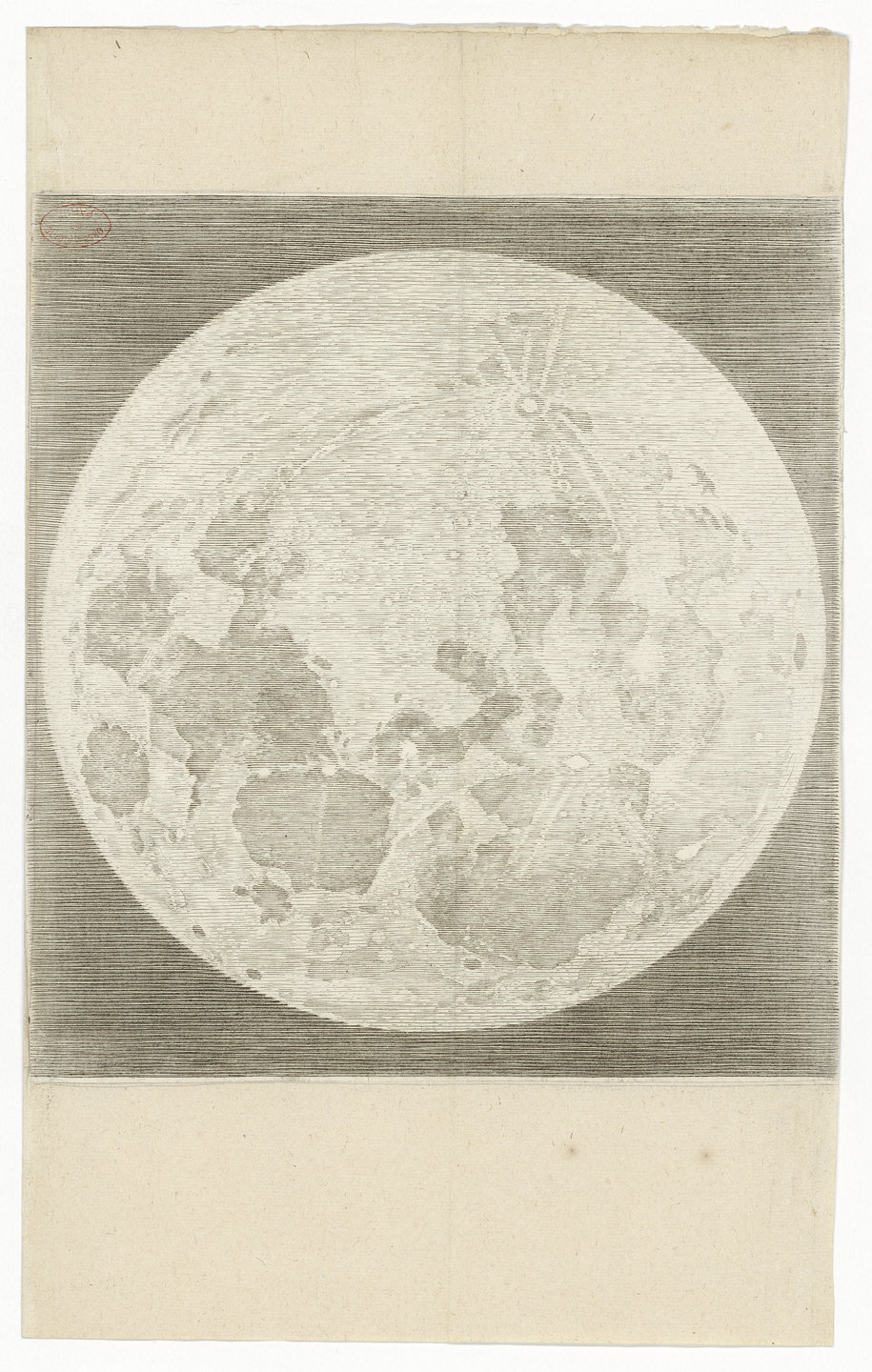 Technical improvements in sky observation instruments made it possible to have increasingly accurate representations of the Moon. This engraving precedes by half a century the famous Cassini map, which will be the authority until the end of the 19th century.

This medal shows on its front a portrait of Urbain Le Verrier, director of the Paris Observatory in the second half of the 19th century, and on its back, 'his' solar system. It shows Neptune, discovered by Le Verrier in 1846, as well as Vulcan, a hypothetical planet that he placed between the Sun and Mercury to explain anomalies in the latter's orbit.

Medal commemorating the centenary of the discovery of Neptune, Georges Guiraud, 1946, Inv.N°93

Discovered by Le Verrier in 1846, Neptune is the last planet in our solar system. It is represented here in an allegorical way, by a trident symbol of the god whose name it bears, placed in front of the astrological sign of Capricorn and a starry sky. 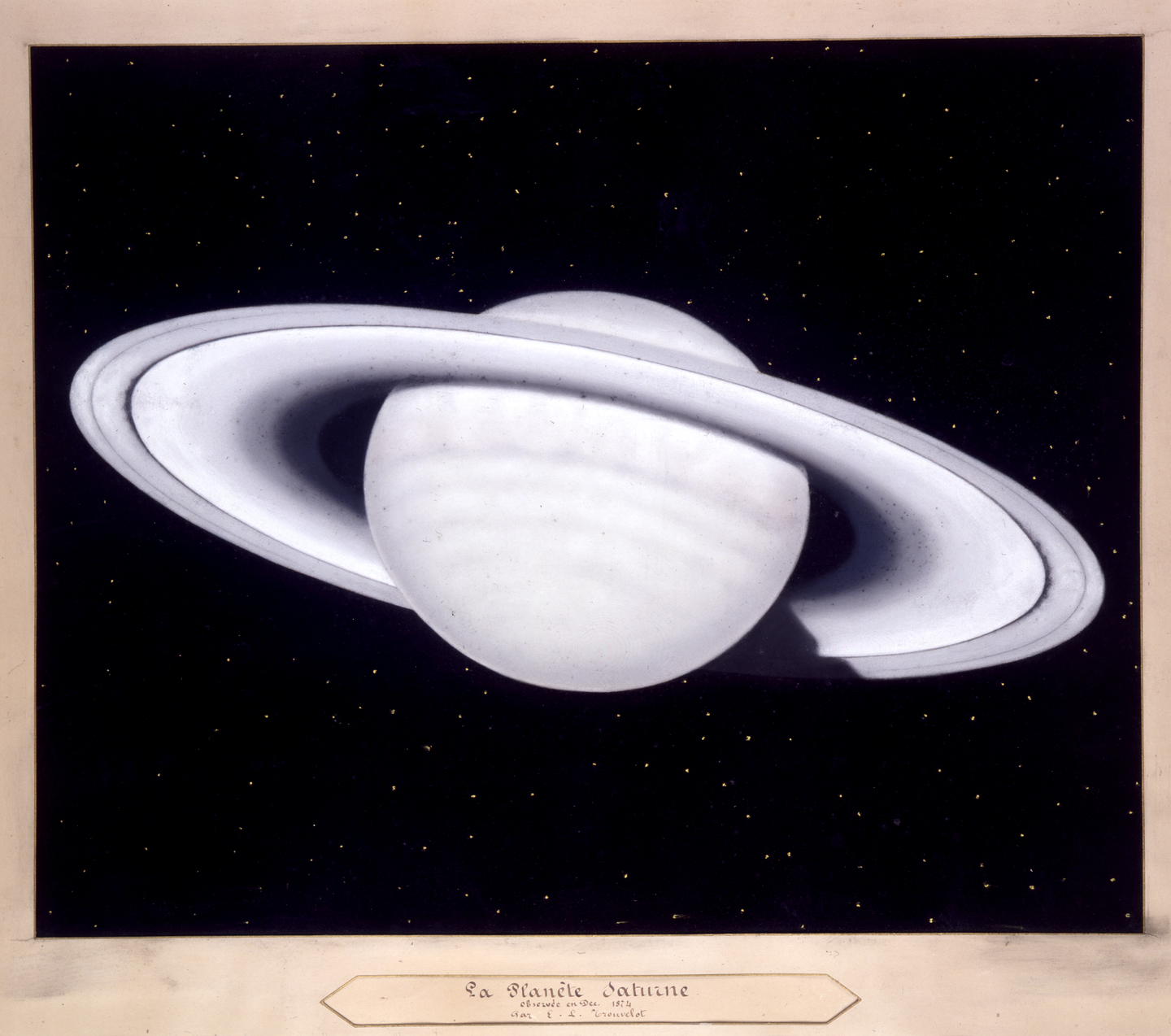 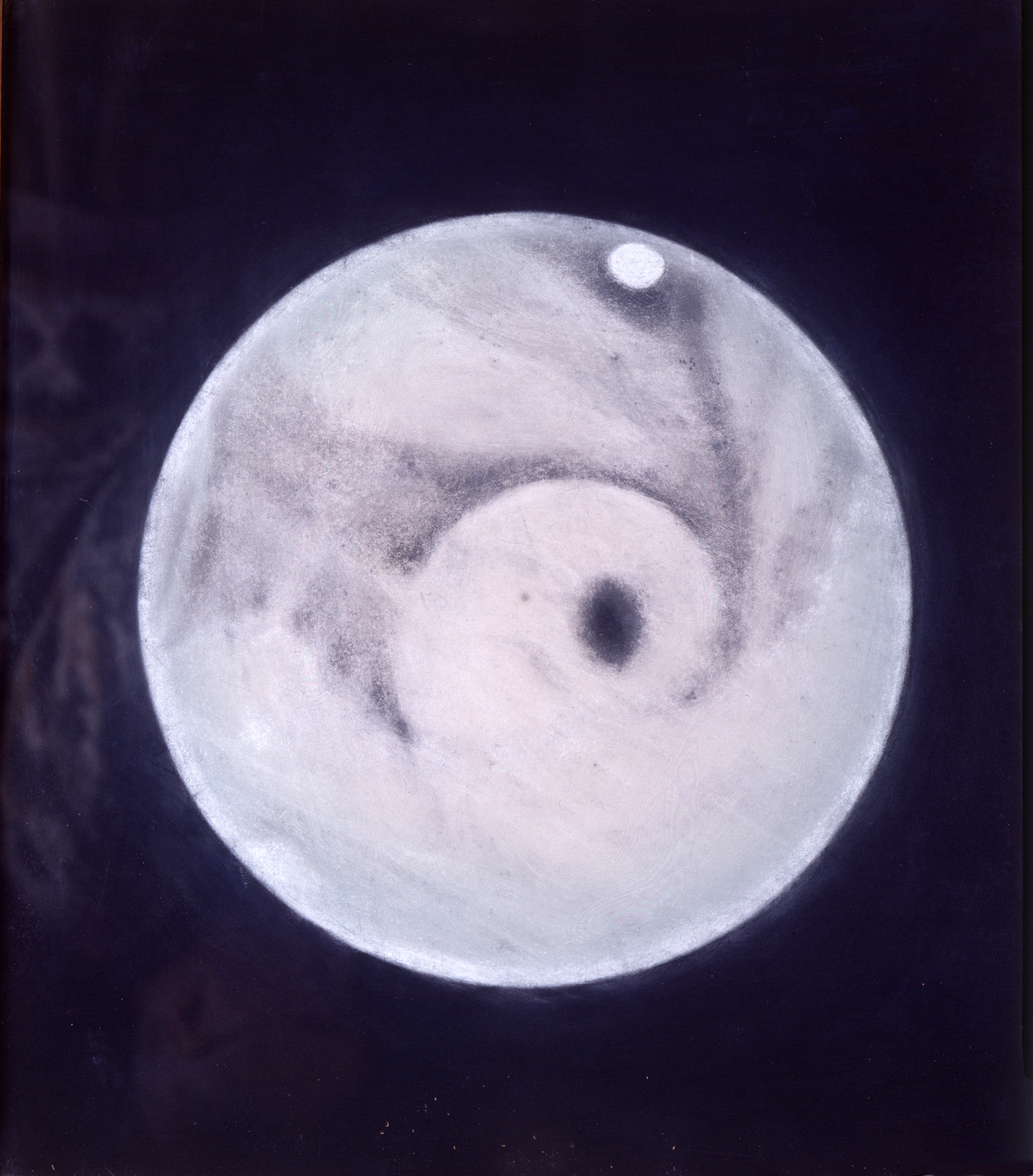 Halfway between a scientific and an artistic representation, these pastels by Trouvelot are among the most valuable collections in the library. 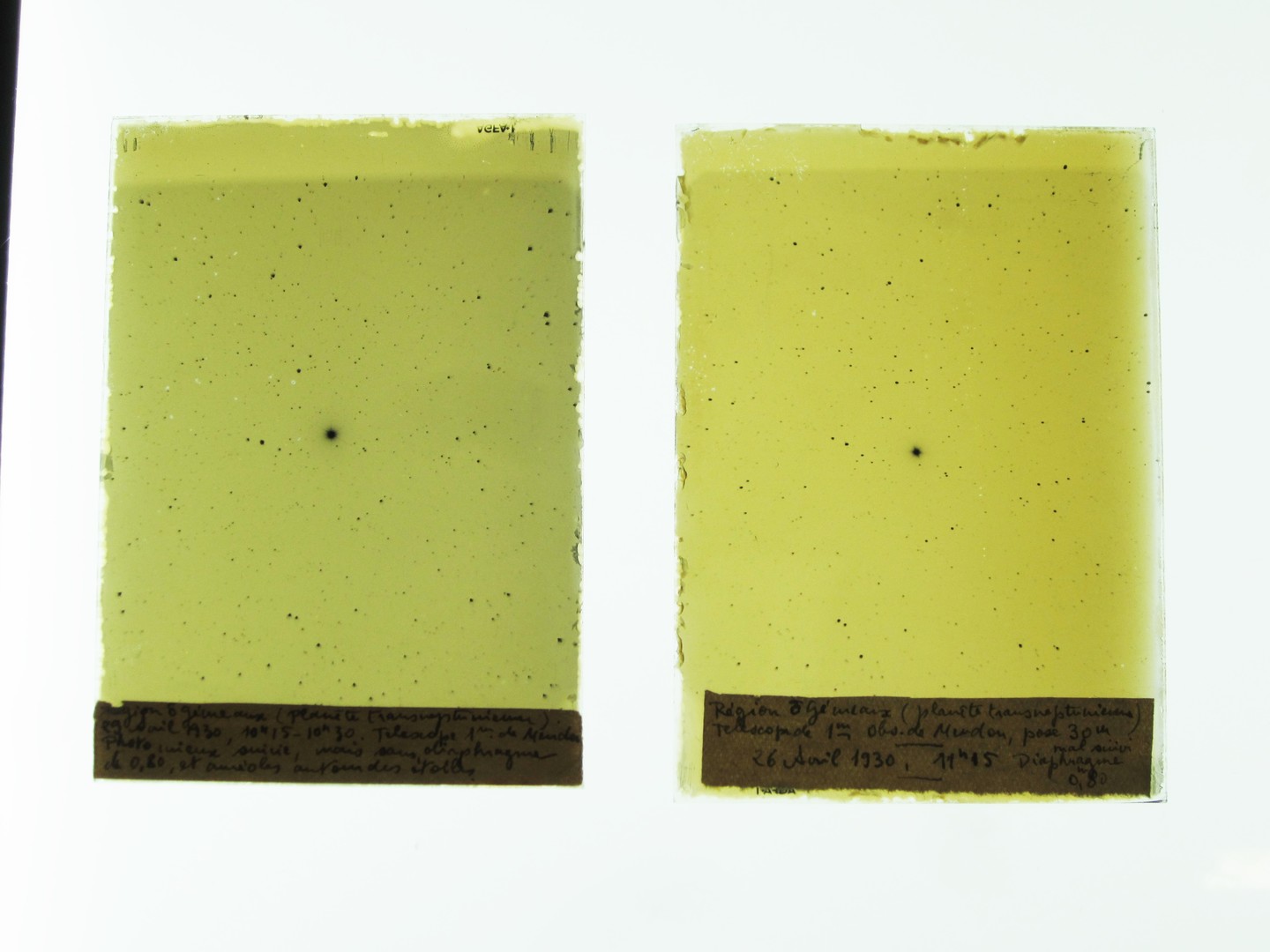 The Observatory Library has a very rich collection of photographic glass plates of various origins, including this one taken with the one-metre telescope of Meudon. It shows one of the first representations of Pluto, which had only just been discovered. This new planet, which became a dwarf planet in 2006 but is still taken into account by astrologers, is for astronomers the perfect example of the lack of credibility of astrology and its refusal to acknowledge the reality of the sky.

← Astrological medecine
The 'divorce' between astrology and astronomy →
About heavenly bodies