Ascendant: Zodiacal sign that rises on the horizon at the birth of an individual, 1st House.

Axial precession: A conical motion of the Earth's rotational axis, which causes the direction of the North Pole to shift from our current North Star to Vega and back again, approximately every 26,000 years. 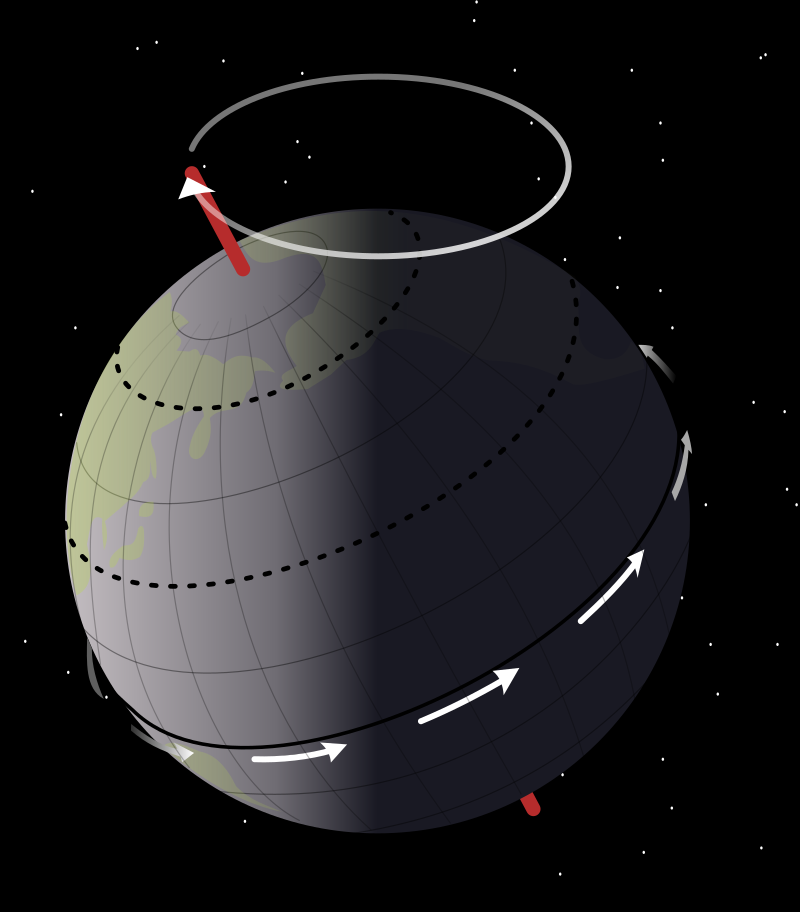 Celestial equator: A large circle drawn on the celestial sphere, which is the projection of the earth's equator onto it.

Domification: Construction of the twelve astrological houses on a star chart. It consists of dividing the sky into twelve parts, of more or less equal size according to the domification used. The calculation of the houses is carried out starting from the hour and the horizon of the place of birth but can take a spatial reference (Regiomontanus, Campanus) or temporal (Placidus). 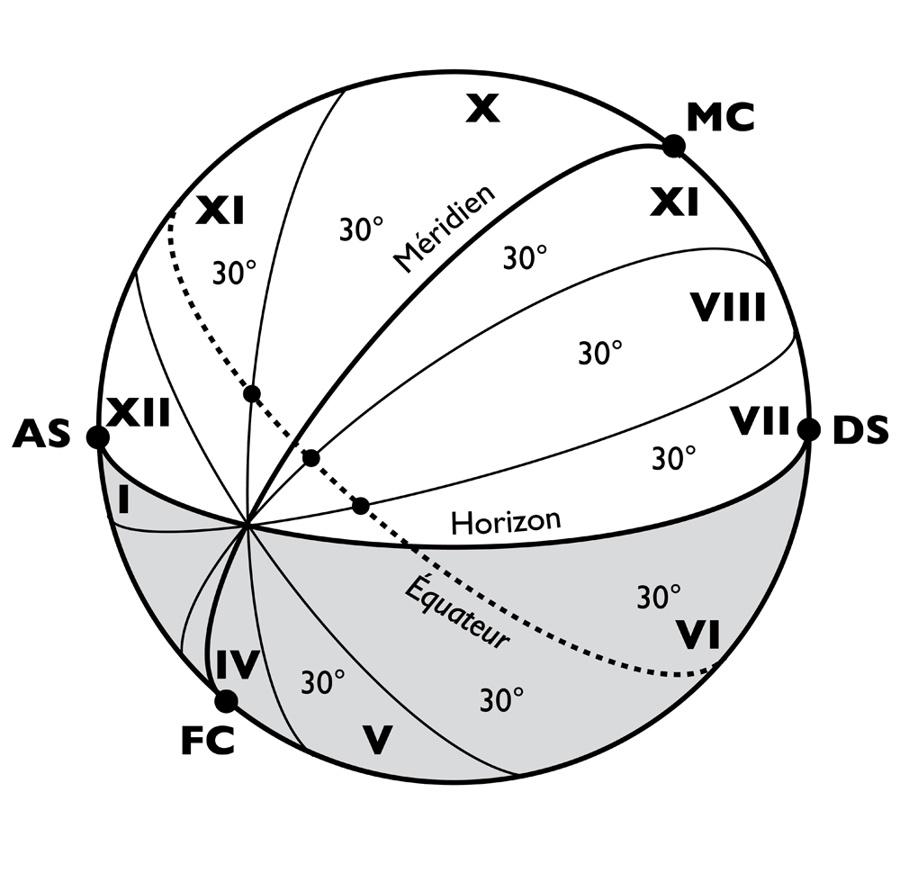 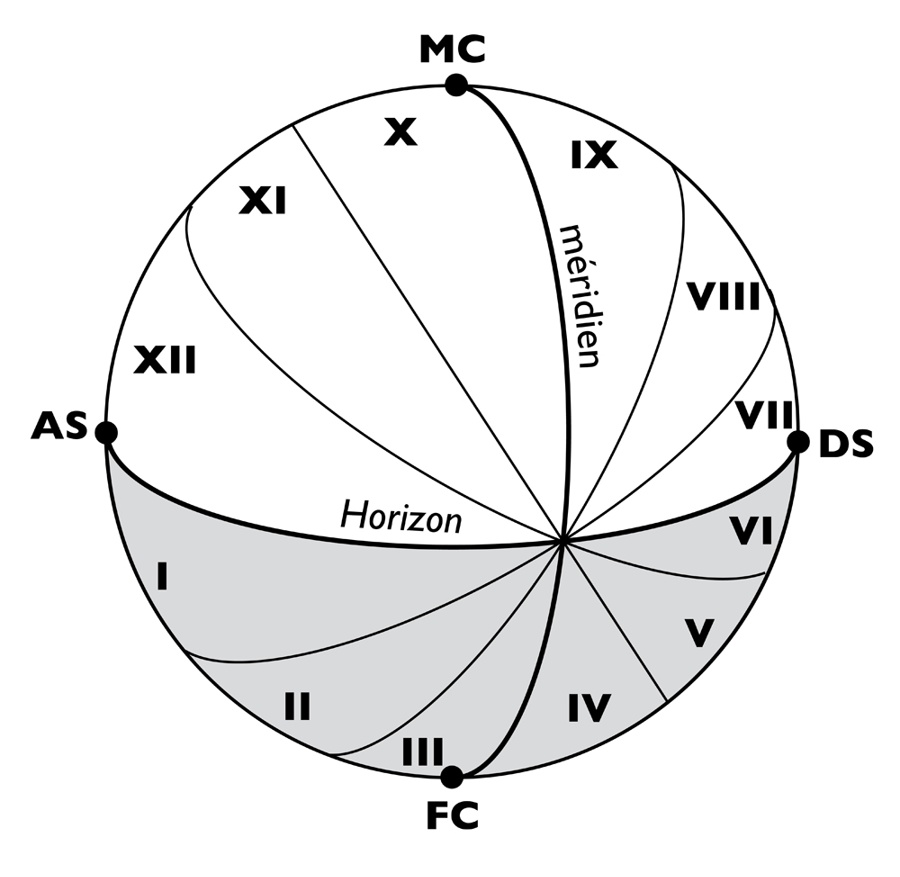 Ecliptic: Refers to both the plane of the Earth's orbit and, from a geocentric point of view, its intersection with the celestial sphere. This circle is punctuated by the constellations of the zodiac, in front of which the Sun makes its apparent annual path.

Ecliptic Longitude: The regular gradation of the ecliptic circle from the vernal point. 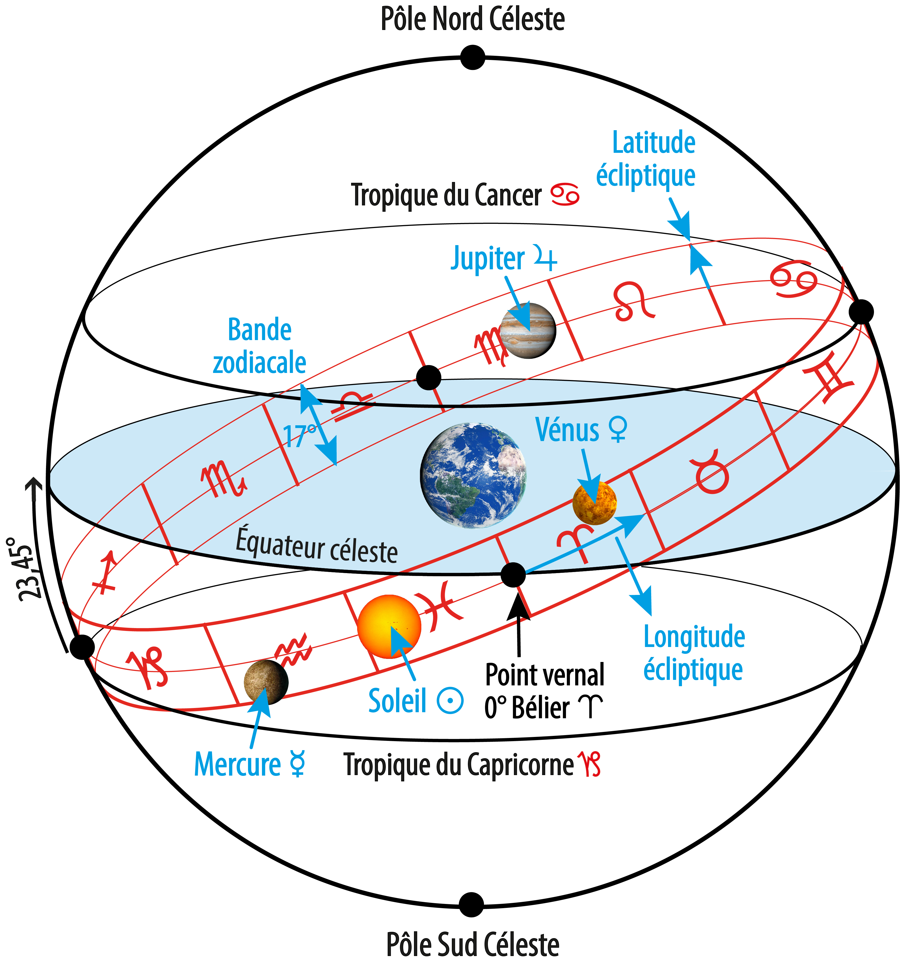 Houses (astrology): There are twelve houses, each representing a part of an individual's life. They come to supplement the signs and the planets to allow the astrologers to diversify the horoscopes. House I (Ascendant), IV (Imum Coeli), VII (Descendant) and X (Medium Coeli) are especially important.

Judicial astrology: Part of astrology which concerns the influence of the stars on the character and destiny of individuals and on human events. It is also called genethiac or divinatory.

Luminary (astrology): Refers to the Moon and the Sun, special planets because they are sources of light.

Natural astrology: Attribution of celestial causes to earthly phenomena (tides, seasons, etc.), establishment of links between natural properties and the properties of the stars.

Planets (astrology): Word designating all the celestial bodies whose movement is analysed by astrologers. There are seven planets (Sun, Moon, Mercury, Venus, Mars, Jupiter and Saturn) and all move in the ecliptic band.

Sidereal astrology: Practised mainly in Asia, it aligns the boundary of the astrological constellation Aries with a particular star rather than the vernal point, causing the zodiac to shift from year to year according to the axial precession.

Tropical astrology: Astrology mainly practised in the West that ignores the axial precession and attaches the zodiac to the vernal point, so that the sign of Aries always coincides with the beginning of spring.

Vernal point: Intersection of the celestial equator and the ecliptic circle at the time of the vernal equinox, which marks the 0 degree of the ecliptic longitude. Due to the axial precession, this point moves from year to year in the celestial zodiac (it is currently in the constellation Pisces) but in tropical astrology it is attached to the sign of Aries, whose origin it is (0°).

Zodiac: The circular area of the sky that extends on either side of the ecliptic line to a width of about 17°. The astronomical zodiac consists of thirteen constellations of varying length: Aries, Taurus, Gemini, Cancer, Leo, Virgo, Libra, Scorpio, Ophiucus (or Serpentarius), Sagittarius, Capricorn, Aquarius and Pisces. The astrological zodiac is made up of twelve signs of 30°, Serpentarius not being one of them. 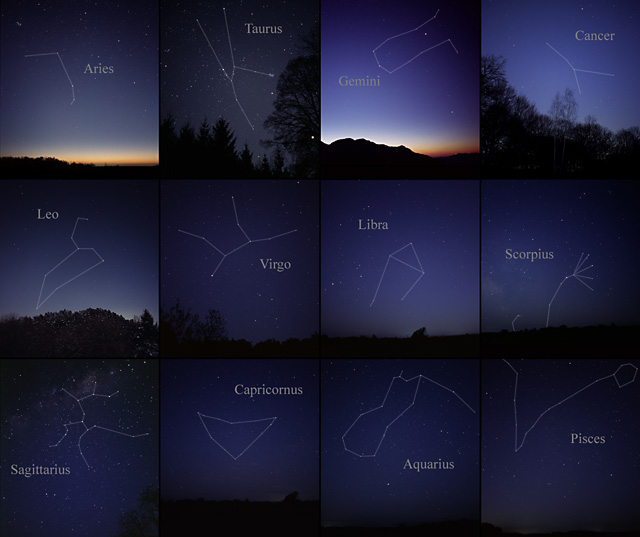 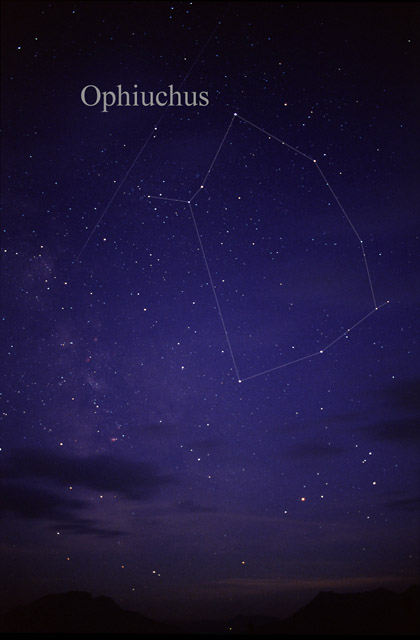