The golden age of astrology

In Rome, astrology was not as popular as in Greece. With the exception of the Stoics, most philosophers were reluctant to accept the idea of celestial fatalism, and preferred other forms of divination. It thus fell somewhat into oblivion until the end of the 9th century, when it reappeared in Europe through Arab scholars who set about translating numerous Greek texts in all fields: medicine, mathematics, astronomy and, consequently, astrology. This is how Ptolemy's Tetrabible, the founding work of Western astrology and still a reference nowadays, was rediscovered through a version commented on by Ali Ibn al-Ridwan. Medieval astrologers also made extensive use of the works of Abu Ma'shar al-Balkhî, known as Albumasar (De magnis conjunctibus), Masha'allah ibn Atharî, known as Mashallah (Epistola de rebus eclipsium et conjunctionibus planetarum) or those of Abu Bakr al-Hassan ibn al-Khasib, known as Albubather (De nativitatibus). Known through Latin translations, in particular those of Jean de Séville, these works were references throughout the Middle Ages.

In addition to their translations and commentaries of Greek texts, the Arab authors innovated by proposing new ways for astrologers to construct their predictions, even if in essence astrology changed little between Ptolemy's Tetrabible and the practices of the late Middle Ages. We still find the use of a zodiac divided into twelve signs of 30° degrees each, in which the seven wandering stars are placed, as opposed to the fixed stars, which are visible to the naked eye: the Moon, the Sun, Mercury, Venus, Mars, Jupiter and Saturn. The only major change is the way the twelve astral houses are constructed, the principle of which is only ambiguously mentioned by Ptolemy. Several astrologers thus proposed modes of domification* whose division varied: al-Qabisi, known as Alcabitius, proposed a rigorous solution in the tenth century which was to have a great deal of influence in Europe before being recognised as faulty and replaced by the calculations of Campanella and Campanus (thirteenth century) or Johannes Müller von Königsberg, known as Regiomontanus (fifteenth century) and Oronce Fine (sixteenth century). The latter two are also renowned for being brilliant astronomers, the former having built the first European observatory and the latter holding the first chair of mathematics, or science, at the Collège de France. 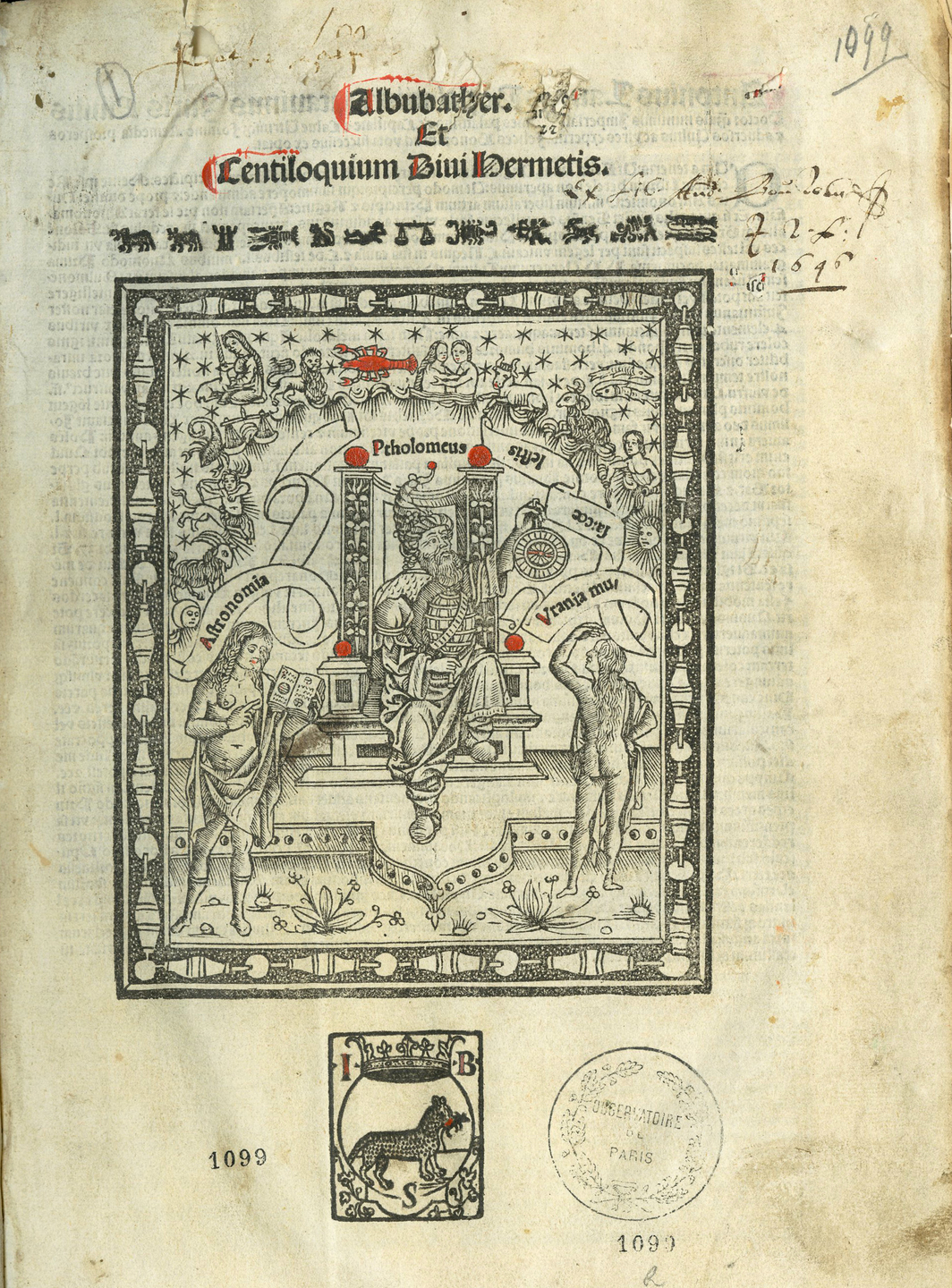 A Persian physician and astrologer of the 9th century, Albubather made a major contribution to the establishment of the canons of astral influences on individuals, and his writings enjoyed great posterity in the second half of the Middle Ages. In this book, he presents the favourable or unfavourable celestial configurations that can be found in birth horoscopes or nativities.

The frontispiece of this 16th century edition shows Ptolemy surrounded by an allegory of Astronomy and Urania, the muse of this art. In the upper left-hand corner there is a representation of the constellation Virgo, which is based on the medieval tradition of the pure maiden accompanied by a unicorn.

Translated from Arabic in the 12th century by the mathematician Jean de Séville (c. 1090-c. 1150) and republished several times thereafter, this famous work by Albumasar (787-886) presents the theory that major celestial conjunctions (especially those between Mars, Jupiter and Saturn) are the cause of major events on Earth. His work on conjunctions and his practical astrology manuals made Albumasar a reference for European scholars. 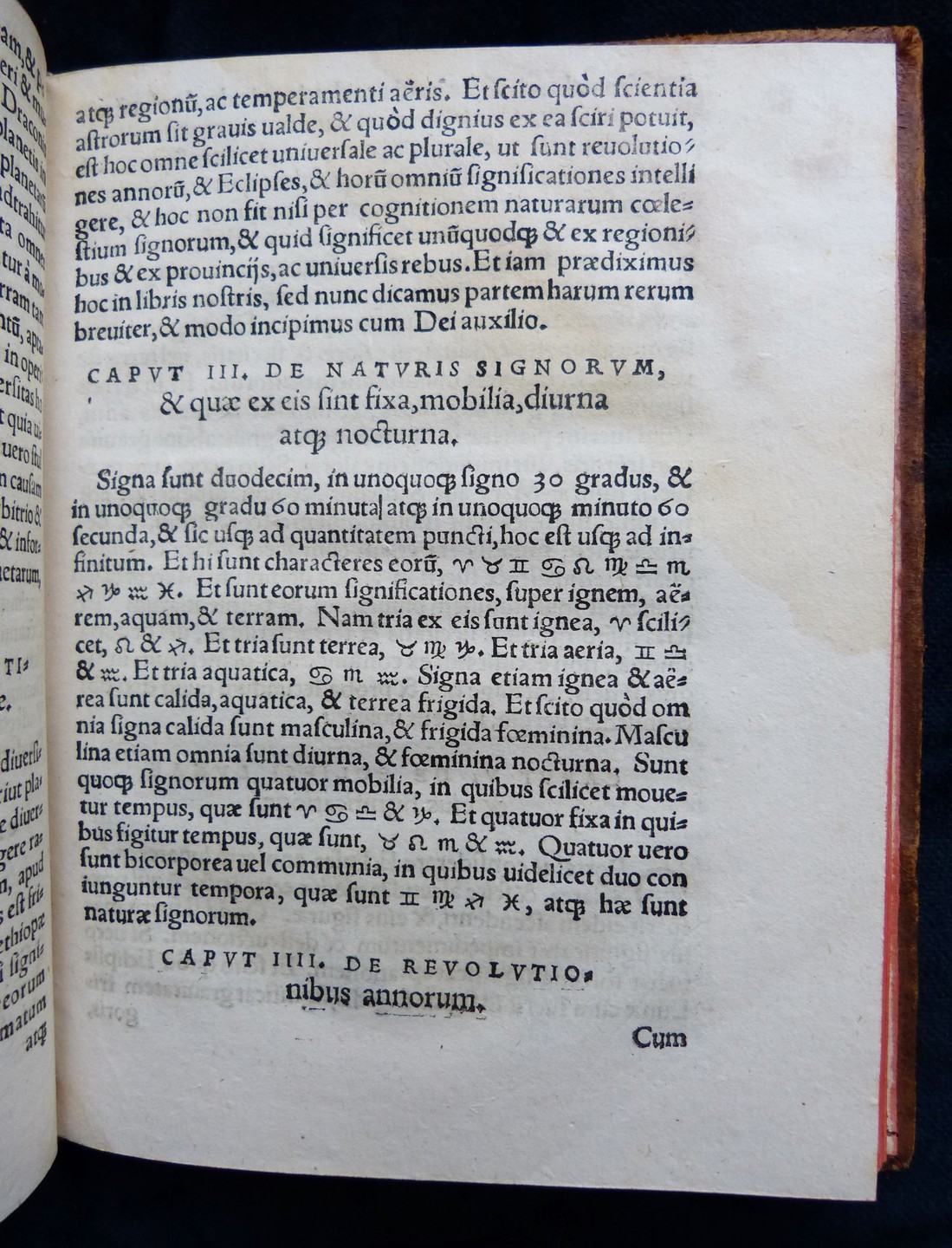 Mashallah (c. 740-815) was a major Persian astrologer and astronomer of the 8th century. In 762, he was one of a group of astrologers charged with determining a suitable date for the foundation of Baghdad, the future capital of the Abbasid caliphate. The work presented here is the second in a compilation that also includes De revolutione annorum mundi and De receptione.

The frontispiece of these tables of the movements of the Moon and the Sun presents major figures in astronomy and astrology. Hipparchus was the first to describe the phenomenon of the axial precession*, which caused a division between tropicalist* and siderealist* astrologers. Ptolemy was the author of major treatises on mathematics, astronomy, astrology and geography. King Alfonso X of Castile is reputed to have commissioned the production of highly reliable astronomical tables, useful to both astronomers and horoscope makers. Nicolaus Copernicus was the first person in Europe since Aristarchus of Samos to demonstrate the heliocentrism of our planetary system. Finally, Tycho Brahe overturned the Aristotelian dogma of the immutability of the supra-lunar world in 1572, thanks to the rigorous observation of a supernova. In addition, the upper part of this frontispiece shows the Leo and Cancer constellations, as well as the Sun and Moon, the luminaries associated with them in astrology.