La Hire and the map of France

Horizontal use of a quadrant, detail of the first print of La Mesure de la Terre. - Paris : Imprimerie royale, 1671.

The major projects of the Academy, such as the amendment of the map of the Kingdom of France, occupied him straightaway. A new method was employed by the astronomers to determine longitudes very precisely: the satellites of Jupiter method.

« The greatest advantage we take of eclipses and satellites observations is the knowledge of longitudes on Earth. Indeed, if two observers, one standing in Paris for instance, and the other in Constantinople, were watching an eclipse of Jupiter's first satellite, this eclipse would undoubtedly occur at the very same moment for each of the observers ; however, since they are located on different meridians, each of their clocks would not display the same time : one would for instance display 9.PM and the other 8.PM. From there, we can deduce the geographical distance between the two meridians, and consequently the longitude. »

Thus, the simultaneous observation by two astronomers of the same eclipse made it possible to determine a difference in longitude. In the second half of the seventeenth century, Jean-Dominique Cassini drew tables of movements of Jupiter's satellites under the meridian of Paris. Therefore, an observer in any place could compare the time when an eclipse took place under the meridian where he was with the time when this phenomenon occurred in Paris: the time difference gave the longitude of the place in relation to Paris. 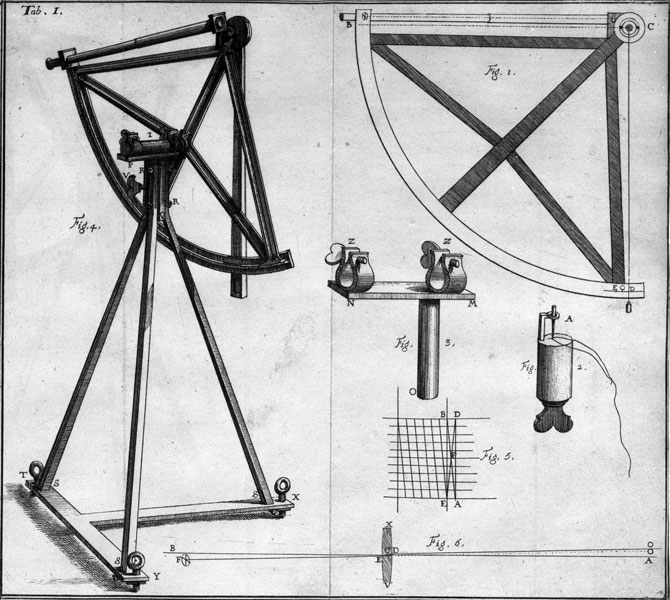 Along with La Hire, Picard was appointed by the King in order to assemble several specific descriptions of the coastlines coming from his engineers' astronomical observations[1]. It was during the closure of the Academy (a given period of time when the academicians could carry out their works, between September 8th and Saint Martin’s Day, i.e. November 11th)[2] that the observation of Jupiter’s satellites was the most favourable. Every year, this vacation period would give Picard and La Hire the opportunity to travel to France’s coastlines.

The first two journeys led the team to Bretagne (1679) and Guyenne (1680). Since La Hire was twenty years younger than Picard, we can assume that he was considered as a sort of assistant. In 1681, the two astronomers performed their observations separately: as Picard set out for Brittany northern coastline, La Hire went to Flanders[3].

The Observatory’s Digital Library keeps the exchange of the correspondence between La Hire and Cassini during this particular journey: 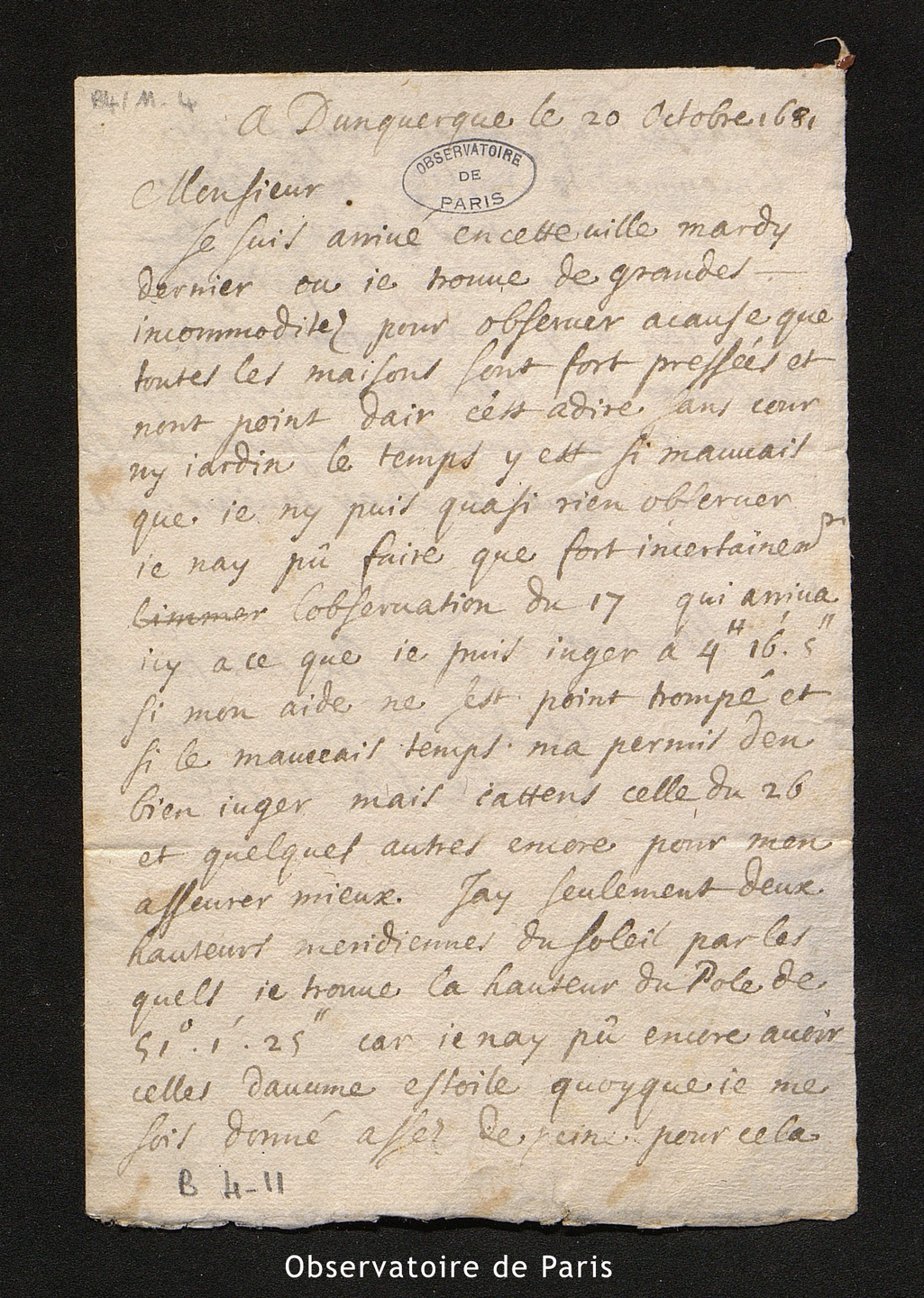 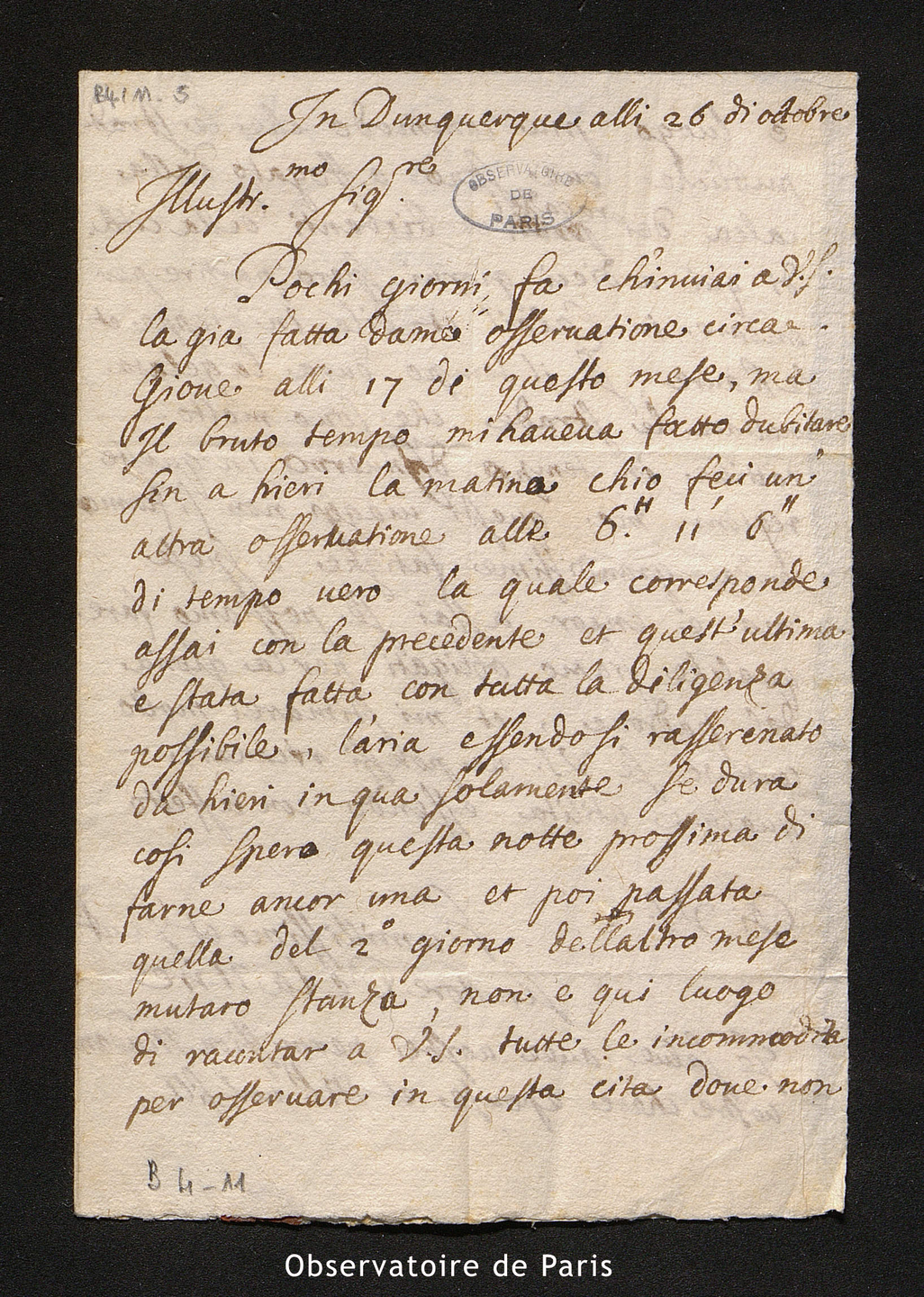 Letter from La Hire to Cassini I, Dunkirk, October 26, 1681, written in Italian. La Hire makes an allusion to the "inconveniences to make observations" and mentions the "crowd of young people [ragazzi] and thugs [birbanti] on public roads"... "within ten days, I hope to be able to leave for Calais, and from there to Dieppe, and Le Havre, if the weather holds. " 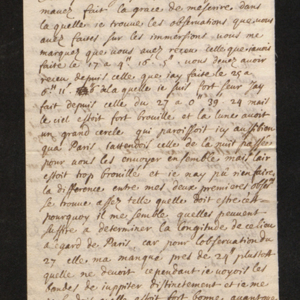 Letter from La Hire to Cassini I, Dunkirk November 3, 1681. Weather is too bad to see Jupiter. "The place is inconvenient, I'm beginning to worry about being sick, the air is very dangerous for those who are not accustomed to it." 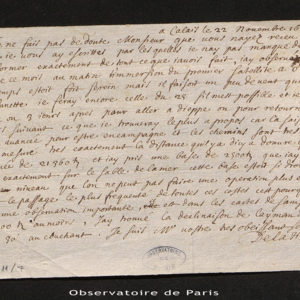 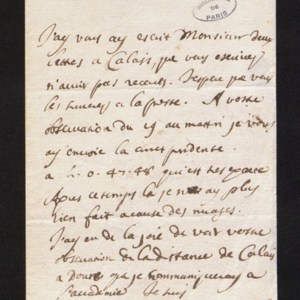 Following his trip to northern Brittany, Picard’s health declined. The man we could consider as La Hire’s master in the field of astronomical observation, geodesy and levelling, was not able to travel extensively anymore. At that time, it took a month to reach the coastlines of Guyenne from Paris: thus, la Hire travelled to Provence without Picard in 1682. 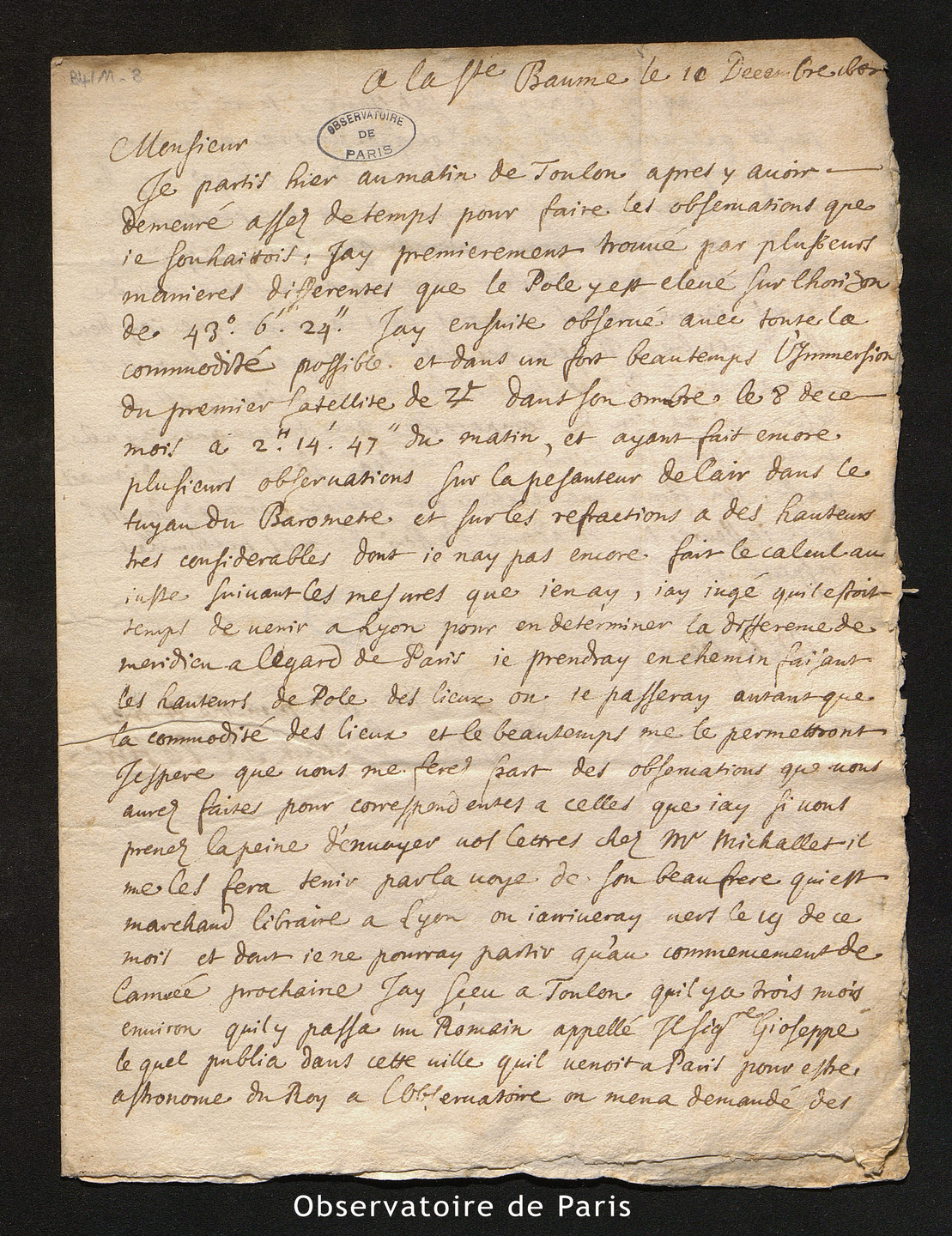 La Hire is in Toulon. He observes "with all possible convenience the immersion of the first satellite of Jupiter in its shadow on the 8th of this month at 2H 14 '47' '".

The results of this extensive astronomical work were presented to the King in 1682. The Carte de France corrigée par Ordre du Roy sur les observations de Messieurs de l'Académie des Sciences was superimposed on an older map designed by Nicolas Sanson (1600-1667), which was considered as the most accurate one at that time. The difference in the layout of the coasts drawn on the two maps was striking: the Kingdom lost 6271 squared lieues[4].

Carte de France, amended by order of the King at the behest of the Academy of Sciences, 1693, Gallica

We note that, while travelling, La Hire did not settle to gather longitudes data. During his first journey to Brittany in 1679, he drew the anatomy of various fish he could get hold of. Indeed, since the very beginning of the creation of the Academy, its protector Colbert had asked for the works to be illustrated by drawings or prints. Along with the anatomist Joseph-Guichard du Verney (1648-1730), La Hire drew approximately thirty aquatic species with yet unknown precision and realism[6].