La Hire and the Paris meridian

La Hire participated to a second project of the Academy: a cartographic and geodesic drawing of Paris's Meridian line. "Cartographic" indeed, since the Meridian contributes to the triangulation network of the Kingdom, allowing to determine an accurate map. "Geodesic" because this map allows to materialize a terrestrial meridian level. It shall cross the entire country, from Dunkerque to the pic du Canigou, through the exact center of the Observatory.

What is triangulation used for?

"By considering, on a flat terrain, a triangle's length of a side measured on ground (which we call "the base"), and by measuring its three angles with a quadrant, we can determine the length of the other sides. We shall then observe remarkable points on the terrain, which compose the apexes of triangles outlined alongside a meridian line. These triangle's angles are then measured. Thereafter, the triangles' sides are projected on the Meridian, whose position has been astronomically determined. Between the departure and arrival points, latitude difference is astronomically measured: we then obtain The Meridian's length on the terrain and the corresponding Earth angle. This method allowed Picard to determine the length of and terrestrial degree and thus the circumference and radius of the Earth."

In practice, this work is not that simple. It requires travelling on poor condition roads, the transportation of heavy and cumbersome tools and the need to seek mountain peaks and landmarks. The use of movable quadrants arouses the curiosity of onlookers against whom the scientists must hedge[1].

Cassini travelled south while La Hire went north. La Hire's travel concerned the Amiens-Dunkerque part of the country: in August and September, he headed to Flandres again[2]. This province had indeed not given him the best observation conditions in 1681. He seeked to identify various observation sites, using "small instruments", which will serve as markers for future triangulations[3].

But the project would soon face a major crisis. As La Hire reached Béthune in September, Colbert (1619-1683) died; The King's building Superintendent Louvois (1641-1691) was then designed as his successor as the Academy's protector. Therefore, the project of the Versailles canal was abandoned. The construction will be resumed in 1700 but only for a short moment: the state funding ended in 1701, just as the War of the Spanish Succession was declared. 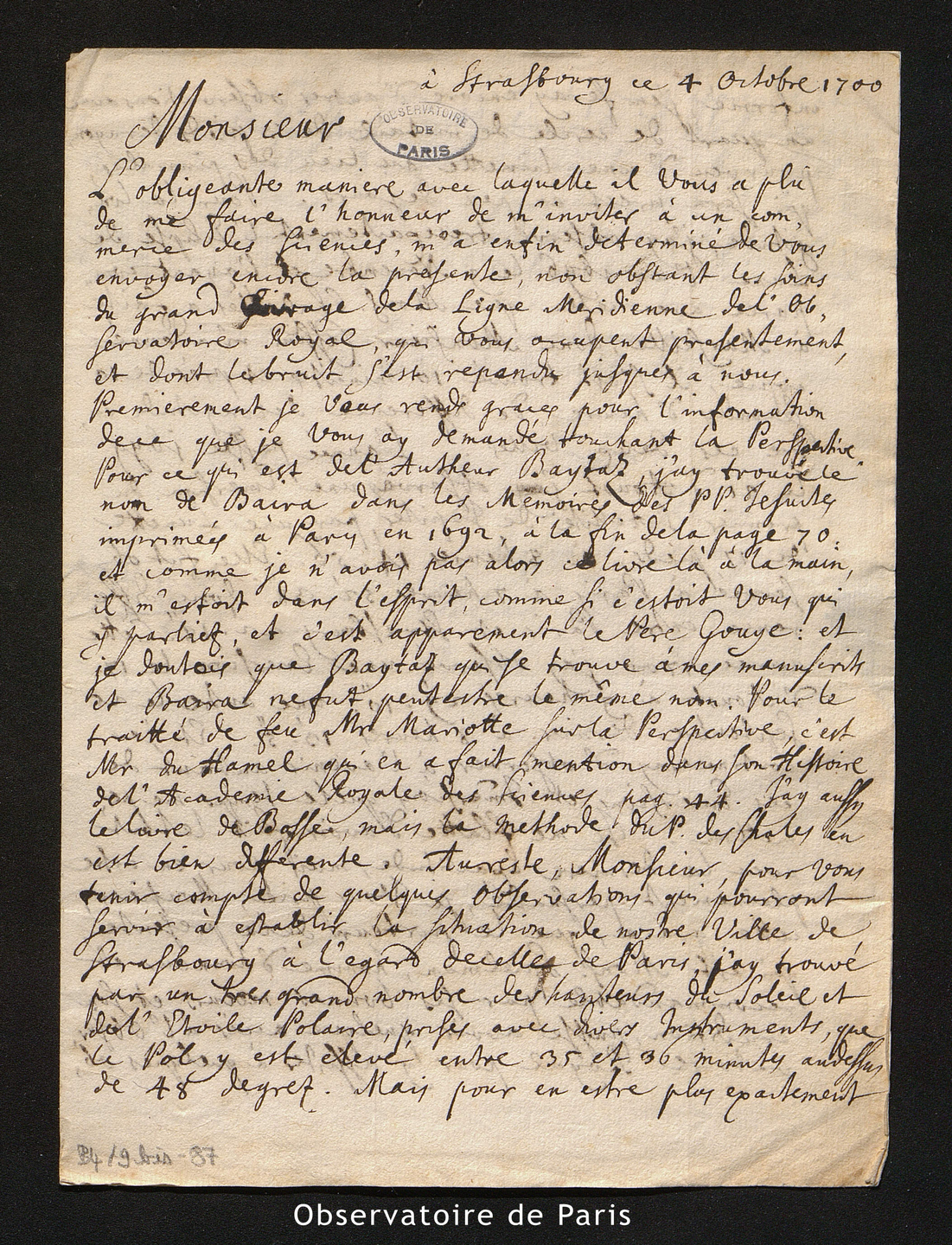 In this letter written by Johann Caspar Eisenschmidt (1656-1712) to La Hire, Strasbourg October 4, 1700, Eisenschmidt mentions the work of the Meridian, "that we have heard about". Eisenschmidt was one of the correspondents of the Academy of Sciences in Strasbourg. 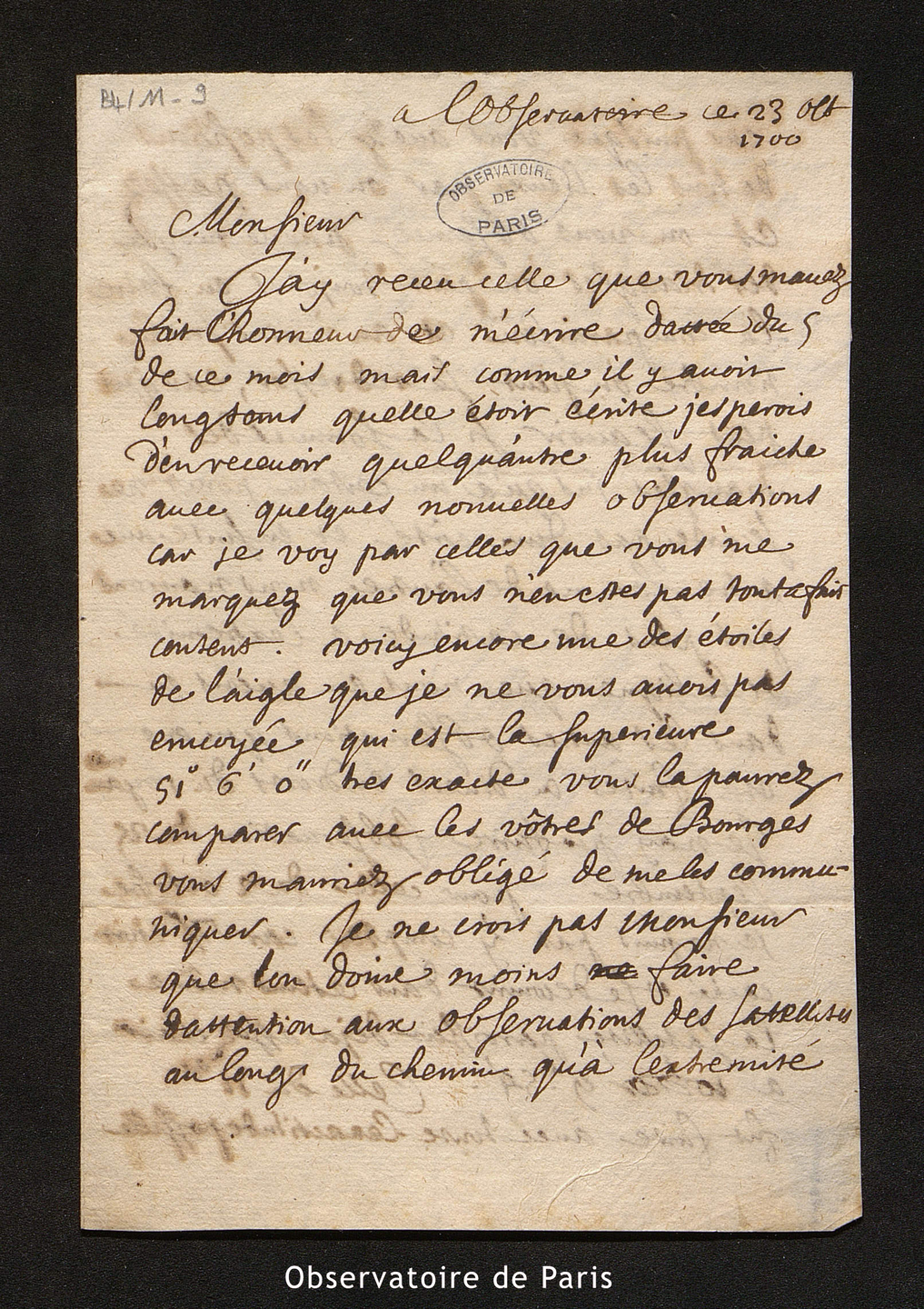 La Hire, at the Observatory, exchanges his observations with Cassini I, at the Academy of Sciences. It is about the "triangles" used for the Meridian. Letter from La Hire to Cassini I, to the Observatory on October 23, 1700, Library of the Observatoire de Paris, B4 / 11.

One had to wait until 1718 for the scientific team to complete the Meridian's drawing. The team was comprised of Jacques Cassini (1677-1756, son on Jean-Dominique Cassini), Gabriel de La Hire and Jacques Philippe Maraldi (1655-1729)[4].

[2] Notably in Dunkerque: La Hire often complains about the "inconveniences" making his observations difficult. The bad weather, the poor road conditions and even the onlookers are pointed out. See the letter addressed to Cassini (dated 20 October 1682) and another written in Italian (dated 26 October 1682), perhaps freer than others, where La Hire complains about the ragazzi and the birbanti ("young people" and "thugs").