Charles Messier was born on June 26th 1730 in Badonviller, in the Principality of Salm, included in the Holy Roman Empire. The tenth of twelve children, he loses his father at the age of eleven and grows up with his brother Hyacinthe, who holds an administrative position in the service of the princes of Salm. In 1751, when the Principality of Salm is divided, a part of it joins the duchy of Lorraine and then the kingdom of France. Hyacinthe Messier settles in Senones where as Charles goes to Paris.

In Paris, Charles Messier is employed by the astronomer Joseph-Nicolas Delisle at the Collège de France. He records observations and copies maps of Beijing and of the Great Wall of China. When Delisle exchanges his manuscripts for the title of Astronomer of the French Navy and an annuity some months later, Messier becomes a clerk of the French Navy and joins the observatory of the Hôtel de Cluny.

In 1757, Messier starts looking for comet Halley, whose path has been calculated by Delisle. But there is a mistake in Delisle's calculations and Messier surveys a too restricted area. Finally he recovers the comet on January 21st 1759. During these observations, he discovers many objects, such as the Crab Nebula, the first object in his future catalog, called Messier 1 or M1. For several years, Messier devotes his life to comet chasing and Louis XV nicknames him the "Comet Ferret". According to Lalande, he observes 41 comets, claiming 21 as his own.

Delisle gradually keeps in the background and Messier investigates new fields of research. Messier becomes a member of the Royal Society of London in 1764, of the French Académie des Sciences in 1770, and he is appointed Astronomer of the French Navy in 1771. After his election to the Academy, he publishes his famous Catalog of Nebulae and Star Clusters (Histoire de l’Académie royale des Sciences, année MDCCLXXI, avec les mémoires de mathématiques et de physique pour la même année, Paris, Imprimerie royale, 1774, 435-461), in which he describes 45 objects. He extends his observations, with Pierre Méchain, the future director of the Paris Observatory, and adds new objects to his catalog, publishing a list of 68 nebulae and star clusters in 1780, and of 103 objects in 1781 (Connoissance des temps ou connoissance des mouvements célestes pour les années 1783 et 1784, Paris, Imprimerie royale, 1780 et 1781). The M104 to M110 objects are observed by Messier and Méchain after this third edition and added to the catalog much later.

Messier is awarded the Legion of Honour by Napoleon the First in 1806. Grateful and eager to  get financial supports, he publishes a paper at his own expense to devote the great comet of 1769 to the Emperor. Weakened by age and an impaired vision, he dies in Paris on April 12th 1817. 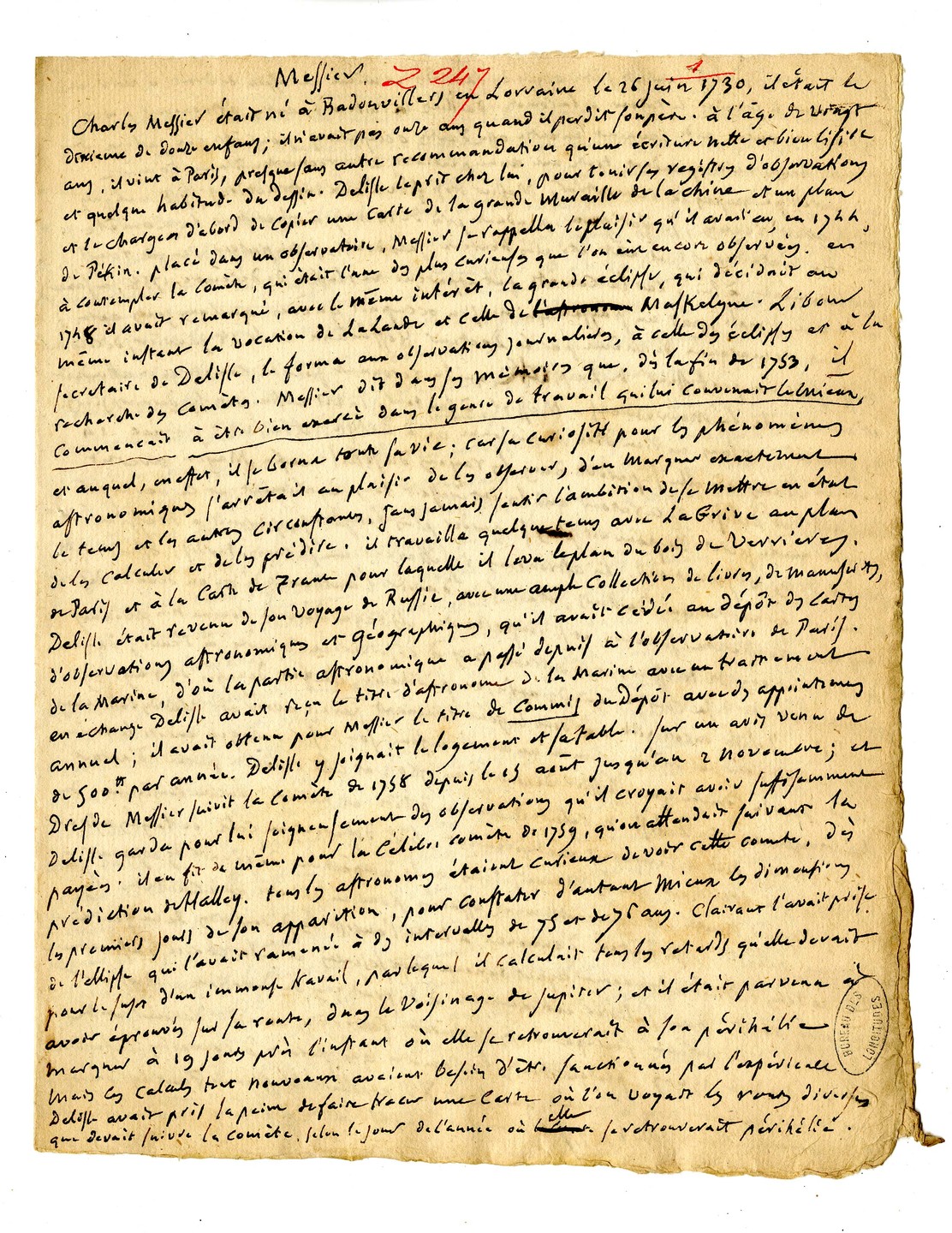 Biography of Charles Messier by Delambre